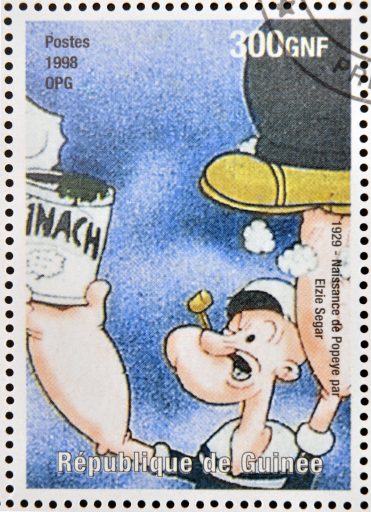 A stamp printed in Republic of Guinea commemorates the birth of Popeye, by Elzie Segar circa 1998 (photo: bigstock)

Most of us in the US are familiar with Popeye the Sailor Man; the cartoon character who eats his spinach straight from the can, and instantly grows powerful arm muscles so that he can fight his dastardly foe!

Popeye’s instant transformation was based on a research mistake about the amount of iron in spinach (3.5 milligrams, not 35). This mistake (and unintended marketing bonanza for canned spinach)  reportedly increased American consumption of spinach by 30 percent in the first half of the 20th century.

Mistakes aside, however, spinach is rich in iron and other nutrients. In addition to a low calorie and carbohydrate count (7 per cup and 1.1 grams), this leafy green veggie has more than half the adult daily requirement of Vitamin A, according to the U.S. Department of Agriculture, or USDA. Spinach also has almost 1000 percent of the required amount of Vitamin K, the bone-health vitamin!

Some other fun facts about spinach include:

The next time you sit down to a plate of spinach salad or a colorful, healthful platter of spinach stir-fry, rest assured that spinach’s hero, Popeye, is not forgotten. From his first appearance in 1929 (in the comic strip Thimble Theatre, by Elzie Segar), to his emergence as an Internet icon, Popeye remains alive and well, and so does the popularity of spinach!