Sweet Corn Has its Fair Share of Nutritional Benefits

Corn on the cob has long been a staple at most summer barbecues and cookouts, and rightfully so. Sweet corn is at its best during the summer months for most of the United States. In Arizona specifically, sweet corn season in the Valley lasts from May to early July, but it is extended into September because of the cooler climates up north and in southeast Arizona. 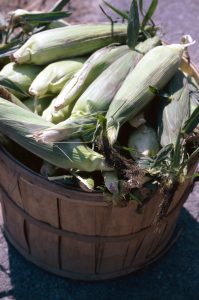 Corn has gotten somewhat of a bad rap since kernels can pass through us intact. But, in an article that CNN published, Registered Dietician Julia Zumpano notes that corn is actually very good for you and does have many nutritional advantages. Corn is high in the two carotenoids lutein and zeaxanthin, which might help lower the risk of macular degeneration and cataracts. Corn also is a source of B vitamins, magnesium, and potassium. Something interesting that the article mentioned is that corn is high in antioxidants, and the darker the color of the corn, like blue or red, the more pigment it has, and the more antioxidants it has.

Another interesting fact about corn that I didn’t know was that because of how high in fiber it is, and because our bodies don’t digest fiber, we actually don’t digest half of the carbohydrates that make up that corn. So, what that means is that when we eat corn, we are consuming carbs, but our bodies aren’t using them as they would usually use carbs because they can’t break them down.

So, corn does actually have some nutritional value to it! And it provides us with a way to eat carbs without really increasing the number of carbs that we are consuming.

Arizona grows a lot of sweet corn, so it is easy to find locally grown corn here in the state! To find out where you can get locally grown corn, or to find recipes that use corn, check out the Fill Your Plate website!