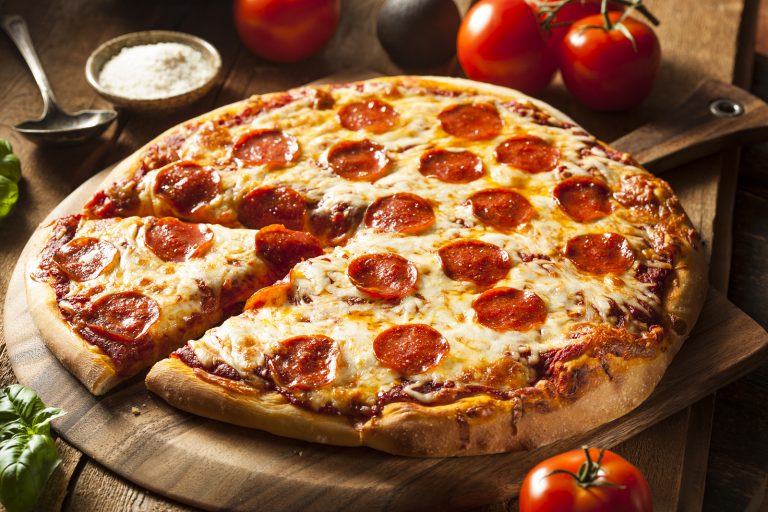 In fact, 50 percent of all pizzas ordered across this great nation include the spicy rounds of pork as their absolutely fav ingredient. (Another source says 36 percent, but the argument is moot, because even the New York Times recognizes pepperoni as America’s favorite pizza topping)!

What is pepperoni? Famous foodies around the country describe it as an American variety of Italian salami. Like salami, it is a mix of spiced, dried pork and beef – heavier on the pork – stuffed into a casing.

These casings, once primarily the long intestine of pigs or sheep, are now cellulose, and the entire process – from pig (and cow) to pepperoni – is a lot like that used by Native Americans to make pemmican.

Pepperoni was first used on American pizza sometime between the First and Second World Wars. The invention was likely a way to use up the scraps of pork and beef set aside when carving out the various steaks, roasts, and chops. Thank goodness for frugality, otherwise the 252 million pounds of pepperoni used on pizzas each year would be absent, and pizza lovers would be heartbroken.

Arizona’s $60 million pork industry also deserves a big “thank you”. One of the state’s top 16 commodity crops, pork is not only a major player in Arizona’s economy, but one that provides both local and national food security at a time when almost half the deaths of children under five worldwide are the result of poor nutrition.

Thanks to that burgeoning Arizona pork industry, manufacturers’ yearly sales of pizza – about $32 billion per year in 2011 – can continue to climb. While takeout pizza sales now occupy the second highest fast-food market niche after burgers, analysts suspect it won’t be long before pizza takes the top slot.

This will push burgers down to third place, while ethnic foods – notably Tex-Mex and Asian – slide easily into second place.

It’s no wonder food fact-finders focus on pizza. Not only is it a huge slice of the eat-in, take-out food marketplace, but it promises to be even larger. Americans currently eat 350 individual slices of pizza each second. In a few years, as today’s Millennials (and younger) reach their adult earning power, expect pizza sales to double. Why? Because most kids currently between 3 and 11 agree that pizza is their favorite food!

Speaking of pizza sales, did you know that the most expensive pizza in the world cost $12,000 and took 72 hours to make?

In terms of the nation’s pizzerias – 70,000 and counting – this anticipated growth means a 100-percent expansion. In Iowa, which has the most pizza stores per person of any state (Mississippi has the fewest), this will mean the addition of more than 1,300 new pizza outlets!

Finally, while it is a little late for this year’s Super Bowl week, expect Super Bowl 2016 to top every other week of the year in terms of pizza sales! This means that Arizona hog farmers had better start expanding their passels, because a Super Bowl without pepperoni pizza could cause the collapse of the social order as we know it!

Well, not really. But you get my drift.

(Note to editor: a group of young pigs is called a “drift”)