Bales, that is. The straw bale garden is one method guaranteed to get around problems like rocky, infertile soil, Bermuda grass, limited water supplies, and old age. 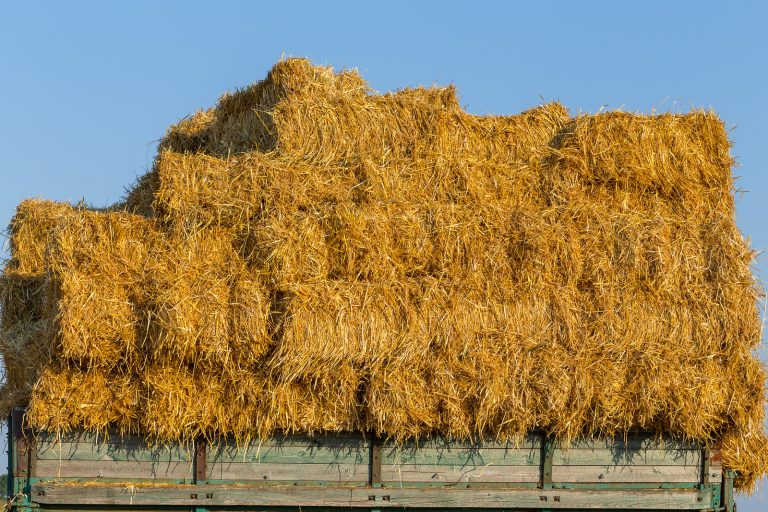 To create your easy-care garden, bales of straw need to be located on an east-west access where they will get about six hours of sunlight. It also helps to place them where they will look like an essential part of the landscaping rather than an add-on. If you can’t decide, ask the advice of a professional landscaper or, at the very least, someone whose landscape looks professionally organized.

Just be sure you don’t end up with hay – especially Bermuda grass hay – instead of straw. Straw is golden (literally and figuratively). Hay is green, and because it is essentially wild grasses and flowers, contains millions of seeds that gardeners do not want in their plantings. You should also avoid barley straw, say experts at the University of Arizona Cooperative Extension.

Straw, the stalks left after cereal grains like wheat, oats, and rye are harvested, contains almost no seeds. Up to 1993, farmers would burn it in the field and till the residue under to fertilize the soil. With new ‘clean air’ regulations, almost half of an estimated 30 million tons of this waste product is left over each year, even after use as animal feed and bedding, mulch and compost, paper manufacture, and biofuels, for example.

That’s a lot of waste, and gardeners who practice straw bale gardening are not only improving the habitat of their peppers and peas, but also reducing the waste stream. At an estimated $7.50 per bale or less, for about 80 pounds of straw, it is one of the most economical methods of gardening – especially when Arizona gardeners consider the cost (and complexities) of getting water. (Alfalfa straw runs about $25 per bale, but is not worth the extra cost, say our experts).

A 2-bale layer, each made up of 6 bales of ‘2-string’ straw, will provide a garden that is about 6 feet long, 3 feet wide, and 18 inches high. This is a comfortable working height for gardeners who find it difficult to get down on their knees to cultivate soil, pull weeds, or pick fresh veggies.

A ‘3-string’ garden, using the same number of bales, will be 4 feet wide, almost 3 feet high, and 8 feet long. Since either configuration is too wide to tend from a single side, both bale types make excellent choices, depending only on the size of the garden wanted.

Leveling the site is important, as is placing the bales. Try to make sure the top layer of the straw bale is cut side up. The opposite side has folded-over straw, which prevents water from penetrating.

When you have your bales assembled, add the sides. These, of reused (but not rusted) metal siding, boards behind utility posts, or any rigid retainer, prevent the bales from collapsing as they disintegrate. If the metal is beginning to deteriorate, paint with a metal paint and coat with rubberized roof paint, even on the inside. Also, make sure the retaining posts are sunk at least 12 inches into the ground.

Share This:
This entry was posted in Gardening and tagged Arizona gardening, Fill Your Plate, Home. Bookmark the permalink.