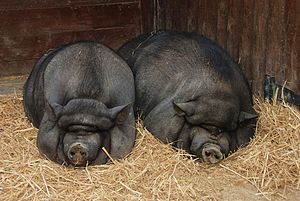 People around the country are celebrating National Pig Day for the 40th year in a row.  March 1st is National Pig Day! Whether you decide to celebrate pigs because they are one of our most intelligent animals or because they taste so good, set aside some time to recognize the part pigs play in all of our lives.

Here are some fun facts about pigs, ways to celebrate Pig Day here in Arizona, and a couple great pork recipes to try with your family.

What to do on Pig Day

Here in Arizona, there are many ways to celebrate National Pig Day.  Whether you choose to honor pigs by eating them or not eating them, you are sure to find something on this list that will be fun for the family.