Don’t Miss Out on the Root Vegetable Renaissance 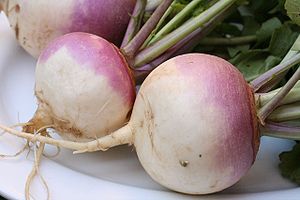 With the exception of the white potato and the carrot, root vegetables have long been disregarded by chefs and home cooks alike.  But as the popularity of farmer’s markets has increased, a kind of root vegetable renaissance has taken root and rapidly spread across the country.  To understand why these nutrient-rich veggies took so long to make their way back onto our menus, all you need to do is look at them.  In their fresh from the farm forms, many root veggies are not much to look at.  Raw, unchopped beets, rutabagas, and turnips are often knotty and could never be described as attractive while parsnips look like washed out carrots.  Unfortunately, we are all missing out on some great flavors and fabulous food because we are judging these root veggies unfairly.  Just as you can’t judge a book by its cover, don’t underestimate how great it can be to use root veggies to fill your plate.

Beets as most of us think of them are root vegetables with a dark reddish purple color, but they can come in other colors like golden yellow and red and white striped.  Sugar beets, which are used to create table sugar and chard, a leafy green, are both relatives of the garden beet.  Here are some great ways to use beets to get more veggies in your daily diet. Beets with Olive Oil, Garlic, and Parsley, Golden Beet, Fennel, and Avocado Salad, and Swiss Chard with Beets, Goat Cheese, and Raisins.

Parsnips are best described as cousins of the carrot.  They belong to the same family and bear a striking resemblance.  They are much paler in color than bright orange carrots and offer a sweeter flavor, especially after they have been cooked.  Parsnips, like carrots, can be served a variety of ways.  Whether you roast them, sauté them, puree them, or serve them in soup, parsnips are a great addition to your regular vegetable repertoire.  Try making  Glazed Carrots and Parsnips with Chives, Spiced Parsnip Soup, and Roasted Parsnips.

Rutabagas, which are also called Swedish turnips or yellow turnips, are a cross between turnips and cabbage.  The round root can be eaten in a variety of ways and the leaves, which grow above ground, can also be eaten as a leafy green.  Rutabagas are more popular in other parts of the world than they are in America and are used in much the same way we use white potatoes.  They can be mashed, boiled, pureed, sautéed, roasted, and even eaten raw.  They show up in many stews and soups and when boiled produce flavored water than is often used as a base for soups.  Try these rutabaga recipes to get this versatile root onto your menu.  Mashed Rutabagas, Roasted Rutabaga, and Bubble and Squeak with Sausage and Gravy.

Turnips are grown around the world and serve as food for people and for livestock.  The smaller varieties, which are grown for human consumption, are more tender than their larger peers and have a flavor similar to cabbage.  Turnip greens are often found in southern-style cooking and are used in a variety of ways.  Here are some great recipes to help you incorporate turnips into your menu- Clapshot, Carmelized Turnips, and Vegetarian Chickpea Curry with Turnips.