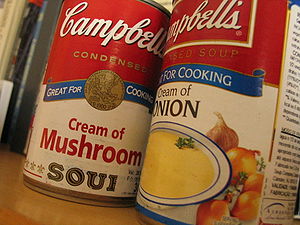 February is National Canned Food Month, when we can celebrate and be thankful for the wide array of food products available in canned versions.  For many consumers, canned food offers a way to expand the kinds of food they eat all year round without increasing their budget.  Mixing fresh Arizona produce, pork, beef, and chicken with canned fruits, vegetables, beans, and other items can help boost your nutritional intake, fill your plate with fabulous food, and stretch your food dollar a little farther.

The concept of canning food in order to preserve it for later use has been around for more than 200 years.  During the Napoleonic Wars, the French found a way to use glass jars to preserve large quantities of food and transport it over long distances to feed the soldiers.  It didn’t take long before glass jars were replaced by canisters made from wrought-iron and tin for practical reasons.  These canisters are the basis for what we refer to as cans today.  As the population in the western world began to shift from rural areas and farms toward urban centers, improvements in canning food offered a way to feed people as they moved farther and farther from the source of their food.

A key consideration from the first can of beans to today’s table is food safety.  Today’s canneries operate under strict regulations put in place to ensure the safety of the canned goods produced.  The best way to be safe is to follow the recommendations of the USDA’s Food Safety and Inspection Service which says: