Let Soup Warm You this Winter 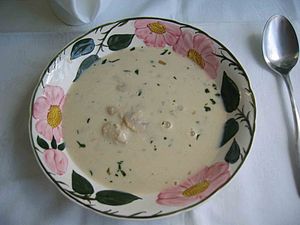 Soup has been around about as long as people have used pots to cook their food.  As anyone who has ever lived on a small food budget can attest, soup can make a little food go a long way.  When it comes to stretching your food dollar, soups and stews are one of the most effective ways to do more with less.  For our ancestors, being able to create a warm, filling, easily digestible meal from whatever ingredients were available was often the key to survival.  So in some ways, we owe who we are today to soup.

In honor of National Soup Month, here are some interesting facts and fabulous recipes to help you warm your winter, stretch your food dollar, and fill your plate….well, bowl.

There is no limit to the different kinds of soup you can make.  The only boundaries are the ingredients you have on hand and your imagination.  This is one reason there are so many soups associated with the different regions of the world.  Before society could move massive quantities of food from one side of the world to another, people used what grew locally to create their recipes.

When you think of Italian food, soups featuring classic Italian flavors like Minestrone come to mind.  Here in the Southwest, we combine traditional soups with local flavors to create soups that are all our own like Comforting Corn Chowder which marries traditional corn chowder with green chilies and cayenne pepper.

Looking to add a little something to your soup repertoire?  Here are just a few of the delicious recipes available in the recipe section of Fill Your Plate.  For more ideas, click the “Recipes” button on the home page and the “Soups” link under Popular Categories. If you have a favorite soup or stew you love to make, we would love to know! Please share it with us!

One Response to Let Soup Warm You this Winter