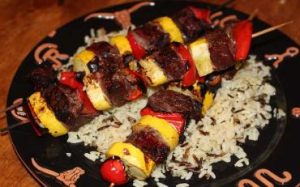 If you have gone to a restaurant lately and looked at the prices, you are probably still picking up your jaw, figuratively speaking.

That jaw dropper is the price of beef, which has gone up about 300 percent in the last few months, according to some retailers. The U.S. Department of Agriculture, or USDA, has a somewhat less dramatic market profile, but does admit that retail beef prices are at record highs, even adjusted for inflation.

The last time beef prices skyrocketed like this was in 1978-79, when former First Lady Hillary Rodham Clinton got behind the wheel of about $1,000 worth of cattle futures and drove them up to $100,000.

In 2010, beef prices jumped again, largely as a result of a 300-percent increase in demand for corn used to make ethanol. Since then, policy makers have requested – and received – revisions of the United State’s renewable fuel mandate (for ethanol, bioethanol, biodiesel, etc.), and beef prices did indeed level off. Unfortunately, so did the size of feeder lot cattle herds, because lot feeding had become inordinately expensive given the increased cost of corn.

The increased price of corn was, and is, a direct result of the three-year-long drought from the West Coast to the Great Plains, running as far north as Minnesota and the Dakotas this November and creating the inevitability that the U.S. would enter 2015 with the smallest cattle herds since the early 1950’s.

Put that back-to-back with the early winter storm that hit the Midwestern Great Plains this year, sweeping from Nebraska to Texas and accompanied by bitter cold that made it not only difficult to transport cattle, but difficult to sort them once they got to the packing plants.

Packers, who had until then been buying in small lots to recover their losses, anticipating a windfall when ranchers sent in their cattle, found themselves paying more for less yet again. On November 14, packer prices of $172 per hundredweight in parts of Kansas and Nebraska were up as much as $5 from the first week of November.

As hard as it has been for ranchers and packers, the sudden, sticker-shock prices are even more of a blow to consumers, especially in Arizona and other cattle-raising areas, where beef lovers relish nothing more than digging into a ranch-raised cut of sirloin or prime rib. In Arizona, this prime beef can come from a number of local ranches like Tomerlins Arizona Legacy Beef in Prescott, for example (find them and the Arizona Farm Bureau, or AFB, on Pinterest).

Are drought and reduced herds the sole cause of this unparalleled rise in cost for beef? Some ranchers, like third-generation cattleman Stayton Weldon of Texas, say yes.

“We’ve got tremendous drought problems. It cuts your herd size down because people have to sell off to provide for the cattle that are left.”

The USDA has also analyzed the problem and noted that the 2013-2014 calf crop was the smallest since 1949. Moreover, young heifers aren’t being shipped for slaughter at anywhere near the rate they were in 2012 as ranchers begin to rebuild herds. This will leave commercial beef output at its lowest since 1994 for at least several years.

Some point to cattle rustling as the cause. Given the per-pound price of good beef, few would be surprised if this were true. One of them, Brad Higgins, a rancher in northern Idaho, admits he has never seen cattle prices this high “in the history of the cattle market.”

Higgins, who also sits on the board of the Idaho Cattle Association, admits concern about theft. Other cattle industry officials agree, noting that record high beef prices are also due to an increased demand for beef in the wake of the Great Recession (2007-2009), as consumers spend an increasing amount of discretionary income on the things they love – and who doesn’t love a good cut of beef?

Finally, note experts, human populations worldwide have continued to increase at the same time that cattle herds have been shrinking.

According to Julie Murphree at the Arizona Farm Bureau, meat prices are expected to ease a bit in late 2015, the easing almost entirely due to ranchers increasing the size of their herds. The real easing will come in 2016 or even later, though, since it takes two years to bring a market-bound steer to maturity.

Murphree suspects that the cattle rustling, while troubling to individual ranchers, is probably not having that great an impact on beef supplies. In addition, while individuals and families can shift their protein-focus to poultry, fish, pork, or even lamb, restaurants are not as flexible. Customers have been driven away by as little as a single favorite item removed from the menu, so restaurateurs will likely find themselves between the rock of raising prices and the hard place of substituting poultry, fish or pork without seeming to downgrade.

In the interim, Murphree notes, pointing to an article in Beef Producer, cattle prices may not have reached their peak for the current cycle, but they will more than likely fall in the spring as chicken, turkey, and pork producers ramp up their production cycle.