Arizona is Sweet on Apples!

Because “Apple Month” occurs in the fall, October by the way, and Arizona families are focused on making the delicious, healthy fruit such an important part of all their fall and holiday cooking and celebrating, Arizona families need to know that Johnny Appleseed may have made it to our desert state, but it’s our apple farmers that are really allowing us to pick this amazing and versatile fruit.

According to Robert E. Call, U. of A. retired extension agent who covered Cochise and Graham counties as a horticulture educator, “Apples are actually one of the most difficult crops to grow,” he says. “To be productive and truly grow them right you have to do 63 different production steps to take care of the trees.”

While Briggs & Eggers, farming in the Willcox area, is Arizona’s only commercial apple producer, our smaller U-pick apple farms also help us get to our Arizona apples. Plus, Briggs & Eggers is on Fill Your Plate because it sells some roadside stand apples. Briggs and Eggers also ship all over the United States and is the only grower of Pink Ladies during the fall period in Arizona because of the state’s four-week jump on the harvest season.

“We’ve been USDA certified organic since 1989,” says Lance Eggers of Briggs & Eggers. “We can pack 1,000 boxes a day at the height of the season. We produce a quality product and are focused on maintaining a reputation of a real good, high-quality grower and packer.”

Members of Arizona Farm Bureau, Briggs & Eggers now have approximately 460 acres of apple orchards. They’re currently producing 500 tons of apples per year, but once all the trees are producing will ship anywhere from 3,000 to 4,000 tons of apples to Florida and New York on the East Coast and San Francisco and San Diego on the west coast and everywhere in between. You can find them in all the specialty organic markets under the Covilli label and watch for the “grown and packed by Briggs and Eggers” to find out they grew in our bright Arizona sun.

Eggers also said he sees “a bright future for apples in Arizona and one of the reasons we’re tied in with a national distributor and co-pack for them.” He adds, “We see a good market for our organic apples and a lot of opportunity to grow our market.”

We also have the well-known Apple Annie’s, also Farm Bureau members, that Arizona families have come to love and make part of their fall family trek to the farm.

Arizona’s climate has always been a key component to our state’s success in agriculture. As we celebrate Arizona Farm Bureau’s centennial in the coming years and the state’s 5 “C’s” we hope to continue celebrating climate and agriculture into the future. Our Arizona apples certainly do! 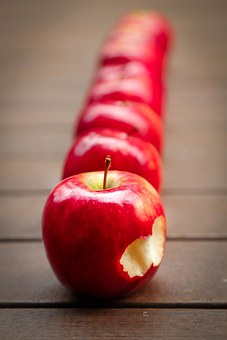 Go to Fill Your Plate for recipes with apples and to read more articles about health, nutrition and the food Arizona agriculture produces.