2012 Food Trends to Fill Your Plate 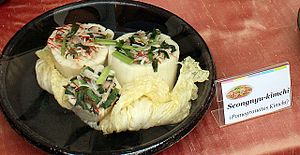 Wondering what food trends 2012 has in store to tantalize or torment your taste buds?  If you ask the experts, the answer may leave you confused and looking for clarity.  As the American Farm Bureau explained in a recent post, while there is general disagreement amongst the experts whether it will be Korean or Indian food that dominates, it is likely to be one of these fun, foreign flavor combinations.

Here in Arizona, we have access to fresh produce and fabulous farm products all year round.  If you are looking for easy ways to incorporate the latest food trends into your family menu, look no farther than your local farmer’s market and local grocery store.  Whether the trendiest plates are filled with food from Korea, India, or somewhere else entirely, you should be able to find most of the ingredients you need from local farms and ranches.

To keep you on trend, let’s take a look at what types of food and flavors are common to each type of food.

The staples of Korean cuisine are rice, vegetables, and meat including beef, chicken, and pork.  Most meals center on steamed rice that is augmented by a wide variety of side dishes.  One of the most popular of these side dishes called Kimchi is made from napa cabbage fermented in a solution of garlic, scallions, and chili pepper and may be served at every meal.  Traditionally, Korean families would make enough Kimchi to last the whole season since the fermentation kept the food preserved for years.

Flavors commonly found in Korean food include sesame oil, soy sauce, garlic, ginger, pepper flakes, and paste made from fermented beans or fermented red chilies.  Although not indigenous to Korea, white short grain rice is the preferred grain in Korean cuisine.  But Koreans don’t just steam their white rice.  They also grind it into flour for rice cakes, cook it into gruel, and make it into wine.  Soy beans are also a main staple of Korean food and have been since people populated the Korean peninsula.  Soy products of all sorts can be found across Korean cuisine and almost every part of the plant is used in one way or another.  Soy beans also play a big part in the fermentation that is a cornerstone of this kind of cuisine.

Although Indian Food varies from region to region, there are a few staples that cross regional boundaries.  These staples include rice, pearl millet called bajra, whole wheat flour, and a wide variety of legumes including pigeon peas, red lentils, chickpeas, and mung beans.  Some of these legumes are also used to make flour and all of them can be served whole, husked, or split.  The majority of Indian food is cooked in some kind of vegetable oil although the base of that oil varies from region to region.  Spices also play a significant part in Indian food and create the base of many of the traditional flavors associated with Indian cuisine.  Common spices include chili pepper, cinnamon, black mustard, garlic, ginger, cumin, fenugreek, turmeric, and coriander.

Dishes and other dominant ingredients vary from region to region including the use of meat as many Indian dishes are vegetarian.

To find local sources for the fabulous ingredients featured in these two types of food, use the “Find a Food Product” section of Fill Your Plate.  Everyone wins when you use local ingredients to stretch your food dollars!