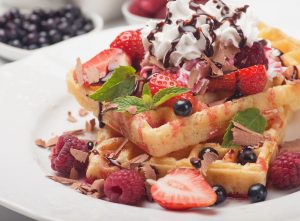 What are your favorite toppings when you eat waffles? (photo credit: BigStockPhoto.com)

Where Did Waffles Come From?

Today, it is very likely that your waffles come from the freezer as pre-made.  Toaster ready options have become a very popular way to make waffles an option for breakfast, even on busy mornings.  However, waffles were around long before we had toasters and freezers.  Although waffles as we know them today didn’t really show up until the Middle Ages, the precursor to this modern day breakfast treat, the pancake, is thought to have been around since before humans stopped living in caves.  Cooking flat batter-based foods between two rocks ensured the end product was cooked more quickly and evenly than if cooked in other ways.

With the adoption of metal tools, it was only a matter of time before this cooking process moved from flat stones to metal plates.  This is the point at which pancakes and waffles find their own identity as the metal plates used to make waffles make it possible to bake batter impressed with distinct designs and patterns.  At this point, this concoction was called by a different name, an Oublie, and was made without leavening agents.  It was almost identical to the wafers used by the Catholic Church for communion, differing primarily in the designs and patterns used to create them.

The term waffle doesn’t show up in English until the 1700’s and is derived from French and Dutch words that can mean honeycomb or cake.  Considering that the waffles we favor today feature a honeycomb design and a cake-like taste and texture, the name makes perfect sense.

What Makes a Waffle, a Waffle?

Waffles are popular in many parts of the world and there are some regional differences when it comes to the recipes used to make the batter and the type of irons used to cook them.  However, there are some distinctive characteristics that seem to apply no matter where waffles are being served.  In order to be a waffle it must be made of a batter or dough that is cooked between two plates.  The plates must be designed in such a way that the size, shape, and pattern of the dough or batter take a specific form when cooked.

What Do People Put on Waffles?

There is no question that one of the best things about waffles is the delicious and dreamy toppings that we all love to put on them.   Although there are some regional variations in waffle toppings, it really comes down to individual taste and creativity.  When it comes to what you can put on your waffles, the sky is limit.  Whether you favor a more traditional topping like butter and powdered sugar or think there is nothing better on your waffles than some fried chicken and gravy, make the most of Waffle Day (August 24th) this month by making your own waffles and topping them with delicious, decadent toppings featuring local ingredients.