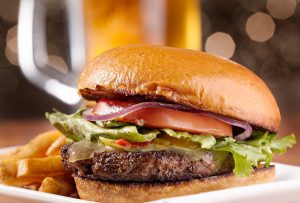 How do you like your hamburger? Check out how people prefer their hamburgers around the U.S. (photo credit: BigStockPhoto.com)

May is National Hamburger Month and here in the desert, there is no better time to grill up some delicious patties made from prime Arizona beef before the high summer heat sets in. To get you geared up for Memorial Day barbecues and picnics, here is everything you ever wanted to know about hamburgers and how we like them.

A hamburger consists of at least one patty made from ground meat that has been cooked and placed between two pieces of bread. Although most Americans wouldn’t consider any patty that wasn’t made from beef and between two buns a hamburger, the actual definition doesn’t specify that it must be made from beef or served on a bun.

Where Did They Come From?

The name hamburger comes from the name of a town in Germany, Hamburg, and the term was likely contrived by German immigrants. While most sources agree that the hamburger originated in the U.S. around the end of the 1800’s, there is much dissent over who should be officially credited with its invention.

The way we like to eat our hamburgers may begin with where we come from. There are several different regional varieties that have collected such a following that they can be sometimes be found beyond their region of origin.

A traditional hamburger generally comes with or without cheese and is topped with ketchup, mustard, pickles, and onions. If that sounds like a standard McDonald’s hamburger, that’s because it is but there is no way to tell if this was how hamburgers were topped before the fast-food chain and they adopted the preference at the time or if our view of a “traditional” hamburger has simply become synonymous with the billions served by the brand.

A Texas burger will comes topped with cheese, jalapenos, and mustard but you can add some other vegetables if you like.

In Wisconsin and other parts of the Upper Midwest, you can find a butter burger which is made by using a buttered bun, adding butter to the raw patty, or placing a pat of butter between the cooked patty and the bun.

Along the southern edge of the East Coast in the Carolinas you can order an “Everything Burger” that will come topped with cheese, chili, onions, and mustard, and if you don’t want your coleslaw on your burger, make sure you request that it be served on the side.

A hamburger in Hawaii reflects the pacific flavors of the area and is often topped with teriyaki sauce and fresh cut pineapple.

But the truth is, no matter where you are, you are likely to find a hamburger cooked just the way you like it and topped with whatever condiments, cheeses, and sauces that tempt your taste buds.