Fill Your Plate with Chicken Wings This Sunday 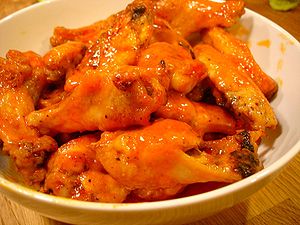 Can you imagine a Super Bowl celebration without chicken wings? Although this tasty snack will be filling the plates of football fans around the country this Sunday, the game day staple has only been around for about 50 years.  Originally developed by a bar owner in Buffalo, New York as a snack for her son, buffalo wings created a market for one of the least popular parts of the chicken.  This year, the National Chicken Council is predicting that more than a billion chicken wings will be eaten on Super Bowl Sunday.

The buffalo wing was created in 1964 at Anchor Bar in Buffalo, New York.  The hot sauce supplier of the bar took the wings on the road with him as a way to sell more hot sauce and their popularity spread.  In the early 1990’s, restaurants like McDonald’s and KFC helped make them mainstream.

The chicken wings that will make their way onto a quarter of the plates this Sunday are actually only 2/3 of the actual chicken wing.  The flapper, which is the thinnest part of the wing, is detached and exported to Asia.

The sharp increase in demand caused by the Super Bowl means that wing prices are at their highest in December and January.  According to the U.S. Department of Agriculture’s Poultry Market News, the price of a pound of wings in Indianapolis during mid-January was 50% higher than it was in July of last year.

Research compiled by The NPD Group shows that chicken farmers should have been rooting for the Ravens during the playoffs, since a Giants/Ravens Super Bowl would have resulted in the highest level of wing consumption of the possible matches.  As it stands, wing consumption should be average.  Although New Englanders are 6% less likely than others to order wings, those in the Mid-Atlantic are 24% more likely to order them.

Here in Arizona, local farms make it easy to get everything you need to make your own chicken wings with all the fixings this Sunday.

“I know our family is looking forward to some traditional Super Bowl Sunday food including chicken wings,” says Arizona Farm Bureau President Kevin Rogers. “We also like vegetable trays just because so much of what’s on our veggie tray is coming from Arizona in the winter including carrots.”

From fresh wings to carrots and celery to cream and other dairy products for your dip, our grocery stores and farmer’s markets are stocked with great choices grown right here at home.