Everything You Ever Wanted to Know About Hot Chocolate 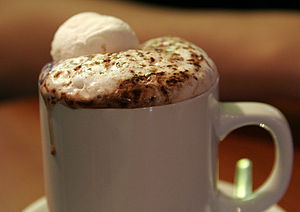 There is not much like drinking a cup of hot chocolate on a cold winter’s day. (Photo credit: Wikipedia)

There is nothing quite like a steaming cup of hot chocolate to warm a winter day.  Whether you are young or old, hot chocolate is loved the world over.  There are almost as many ways to make hot chocolate as there are forms of chocolate and the method you prefer is likely determined by where you live.

The Milk Processors Education Program which is responsible for the popular “Got Milk?” campaign is always looking for ways to encourage people to drink more milk.  Hot chocolate is an excellent way to get another serving of milk into the day for both children and adults.  For more information, listen to the American Farm Bureau’s FoodieNews FoodieCast about hot chocolate.

To help ease the shorter days and cooler nights, here is something sure to warm you from head to toe, everything you ever wanted to know about this delicious drink.

What is Hot Chocolate?

Hot Chocolate Around the World

Not Your Everyday Hot Chocolate

Looking for some ideas on creative ways to enjoy hot chocolate?  Try this unique recipes that take hot chocolate to a whole new level.