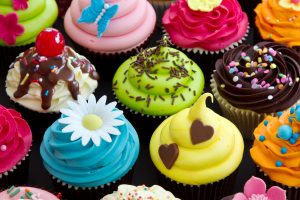 Do you know the history behind the delicious cupcake? (photo credit: BigStockPhoto.com)

It seems like these days everyone is crazy for cupcakes!  Once relegated to classroom parties and afternoon treats, creative flavors of cupcakes are finding their into wedding cakes and onto the dessert tables at baby showers.  No longer just for children, today’s cupcakes are just as likely to feature flavors favored by adults.  Whether they are spread out on trays or stacked up into towers, there is no question that when it comes to cupcakes these days there is something for everyone.

History of the Cupcake

Cupcakes as we know them today have only been around about as long as our country.  The first recipe for a similar cake appears in a cookbook at the end of the 1700’s but the term cupcake doesn’t show up for another 30 years.  Originally, cupcakes were baked individually in small crocks or cups which is where they got their name.  The introduction and wide-spread adoption of muffin pans changed the face of cupcakes forever.  Rather than baking cakes individually, people could now bake 12 at a time.

Cupcakes are also sometimes called fairy cakes because of their small size and often fanciful icing that makes them seem perfect desserts for fairies.   The term “cup cake” can also refer to another kind of cake all together.  Unlike cupcakes, these cakes don’t get their name from their size but from the way they were made.  These cup cakes were similar in color and texture to modern day pound cake and got their name because the recipes called for the ingredients to be measured by volume, 1 cup of butter, 3 cups of flour, rather than by weight.

Growing up, cupcakes were usually made from yellow, white, or chocolate cake mix.  These days, the creative flavors used in the cake, the frosting, and the filling range from sweet to savory and just about everything in between.  While chocolate cupcakes are still one of the most common flavors, you might be surprised to see what other flavors are winning the popularity contest.