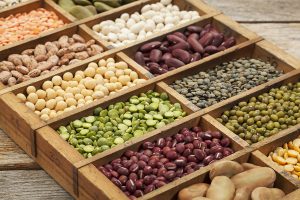 Beans have been around at least as long as we have and are one of the plants that have been cultivated the longest.  Beans have been an important source of protein throughout history because on average they provide more than 9 grams of protein for only 80 calories.  The term bean originally referred only to the seed of one type of bean, the fava bean but over the centuries it has expanded to include most legumes and other plants like soybeans and chickpeas.  March in National Bean month and we thought it would be a great time to highlight this protein-rich dietary staple by helping you to better know your beans.

The majority of beans grown today are summer crops that require warm temperatures in order to grow.  The average growing time is 55-60 days and most bean plants need external support in order to grow.    Beans are not only high in protein, they are also a great source of soluble fiber and a single cup of beans provides 9-13 g of soluble fiber.  The world genebank currently lists about 40,000 different varieties of beans although most of those are not currently being cultivated.   To help expand your knowledge of the humble bean, we picked the most commonly used varieties to spotlight.

The black bean, which is also called a black turtle bean, is commonly seen in Latin American and Southwestern cuisine.   Because these beans are dense with a rich texture, they are also prominent in vegetarian dishes.    Black beans are much higher in calories than some of their less dense siblings with 350 calories per 3.5 oz but they also pack a ton of protein, providing 21.25 grams for that size serving.

Although you may not know by its name, black-eyed peas are actually considered beans because they belong to the legume family.  These beans are pale in color with a large black spot.

Chickpeas are also legumes and may be known by several other names including garbanzo bean, ceci bean, and Bengal gram.  They have been cultivated for at least 7,500 years and contain about twice as many calories, 164 per 3.5 oz, as the average bean.

Green beans are called by many names.  They may also be referred to as string beans, snap beans, French beans, or haricots beans.  Green beans are actually un-ripened pods of common beans and are much lower in both calories and protein, providing 31 calories and only 1.8 g of protein in a 3.5 oz serving.

Kidney beans are one variety of a specific type of bean called the common bean.  Named because its shape resembles that of a kidney, these beans are often seen in chili, soups, and stews.  Similar to black beans, kidney beans are much higher in calories, 333, and protein, 24 g, than some of their cousins.

Lentils comes in a wide range of varieties and have been part of our culinary experience since the Neolithic period which means we have been eating them for more than 10,000 years.  They can range in color from yellows to greens to reds and oranges.  From a nutritional perspective, they are closest to kidney beans in terms of calories and protein.

Lima beans are also known as butter beans and are distinctive amongst the most common culinary beans because of their wide flat appearance and light green color.  They can be grown on both the bush and the vine and have a nutritional profile in line with the average for all beans.