50 Fun Things to Do with Sweet Peppers 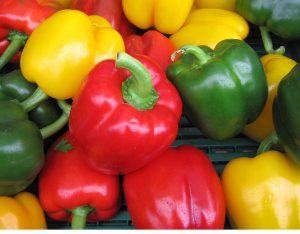 Try one of these 50 fun things to do with bell peppers. (photo credit: BigStockPhoto.com)

Here in Arizona, peppers are usually the hot and spicy kind, but since this month is bell pepper month, we thought we would invite you to celebrate a whole different kind of pepper.  Bell peppers, which are also called sweet peppers, offer an excellent opportunity to add a little crunch to almost any meal.  They come in a range of colors as well which can add a little pop to any dish without adding a ton of heat or spice.

Check the farmer’s markets or the produce section of the grocery store for green, red, orange, brown, purple, white, and even yellow varieties and then put those peppers to work by trying out some of our 50 ways you use them.