Everything You Always Wanted to Know about Bell Peppers 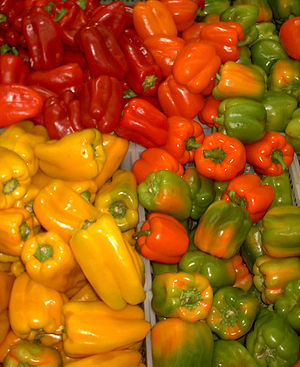 Do you know the differences between types of bell peppers?  (Photo credit: Wikipedia)

When most people talk about peppers, they are referring to the hot, spicy, or chili variety.  But there is a whole other type of pepper that can be used in a variety of ways to help fill your family’s plate.  Bell peppers, which come in a variety of colors, are very versatile and offer a great way to add some color and crunch to your everyday dishes. In Arizona, we grow lots of this wonderful pepper throughout the state.

Great Ways to Use Them

Peppers can be added to almost anything for a burst of color or a crispy crunch.  From soups and salads to sauces and salsa, bell peppers can enhance almost anything.  Here are some great ways to get these veggies into your everyday eats.