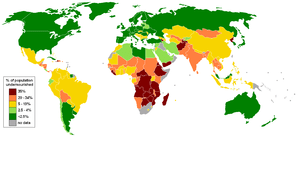 July 11 is World Population Day, an awareness event that was established in 1989 by the United Nations intent on garnering attention for issues related to the world’s population and world hunger.  As the number of people inhabiting our planet topped the 7 billion mark last year, it is more important than ever to focus on the ever increasing population and what it means for all of us, those already here and those that will be born in the coming years.  While there are several significant population problems that the UN’s Population Fund (UNFP) is working to address, food security and how to meet the needs of all these mouths to feed, thus combating world hunger, is at the top of the list.

According to USAID, there are already 1 billion people each year suffering from chronic hunger and more than 3 million children die each year from being undernourished.  The problem of world hunger doesn’t belong only to those in the third world.  Here in the U.S., the USDA reported in 2010 that 14.5% of U.S. households experienced some period of food insecurity during the year.  This means that each of these 17 million households had trouble putting enough food on the table to support a healthy lifestyle.  This statistic shows that here in the richest country in the world, we are in line with the global problem and that 1 out of any 7 Americans may be struggling to get the food to thrive on any given day.

Why Are So Many People Hungry?

For many Americans, it is hard to fathom how there are so many people who are starving.  Most of us have more food than we need and even those Americans who struggle with hunger may not have all the food they need, but they are not starving.  In a report entitled Global Food Losses and Food Waste, the Food and Agriculture Organization of the UN notes that, on average, each American throws out 253 pounds of food each year which is 10 times as much as people in Sub-Saharan Africa and Southeast Asia throw out.  This makes it clear that our attitudes about food are very different and helps explain why we are often surprised to hear how many people are actually starving to death on our planet.  To answer the question, therefore, we need to understand what causes people to go hungry.

The World Hunger Education Society (WHES) cites four primary causes of hunger as poverty, harmful economic structures, conflict, and hunger.  People who live in poverty have limited resources for purchasing food, which also means they have limited means to purchase the supplies and tools like seeds and equipment they need to grow their own food.  For those living in countries or regions where the economic structure of the country favors those in power at the expense of everyone else, food is often used as a tool to obtain compliance and hunger used as a weapon to punish those who speak out or fight back.   Conflict disrupts both food production and distribution and often causes widespread problems with food access.  Hunger also causes hunger.  People who do not receive the nourishment and nutrition they need to be healthy are less able to work, go to school, farm, or hunt which further limits their ability to obtain the food they need.

The mere fact that 1 out of every 7 people on the planet doesn’t have enough food to eat underlines the immediacy with which we must invest in agriculture, devote resources to increasing food production, and address issues with access to both food stores and agricultural support around the world.  As we look ahead to 2050 and a potential population of 9 billion, the stress on the global food system and need for change is clear.

Arizona’s farmers and ranchers, along with farmers across America, are dedicated to improving technology and farming practices to ensure we meet global food demands in the future.