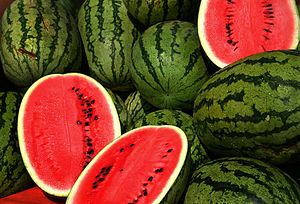 What are you going to do to celebrate National Watermelon Day? Try some of these tips for some family fun! (Photo credit: Wikipedia)

If there is one fruit that is always associated with summer, it is the watermelon.  Who doesn’t have a sweet summer memory featuring this refreshing melon?  Long a staple of backyard barbecues and summer picnics, there is more to watermelon than a juicy sweet summer treat.  August 3rd is National Watermelon Day which provides the perfect opportunity to expound upon all the wonders of the wonderful watermelon.

Where Did Watermelon Come From

According to the National Watermelon Promotion Board, watermelon is believed to have grown natively in the African Kalahari Desert.  In ancient times, it was the fruit of kings and watermelon was often included when they were entombed so they would be well fed in the afterlife.  Watermelons even show up in the hieroglyphics found in ancient Egypt.  From there watermelon found its way around the world, showing up in a new continent every couple centuries going from Africa to Asia to Europe and eventually to North America.

Where Do They Grow

Today, watermelon is grown in almost all 50 states, although the United States is not the number one watermelon producer on the planet.  That honor goes to China which produces almost 70 million tons a year.  By contrast, that is more than 30 times the amount of watermelon grown here in the U.S., even though we are the 5th largest producer in the world.  Here at home, the states that grow the most watermelon are some of the warm weather states including Texas, Florida, California, and of course, Arizona.

How to Pick the Best Watermelon

When you are shopping for watermelon, there are a few things you want to pay attention to in order to get the best melon possible.  Start by checking to ensure the outside of the watermelon looks good.  This means that the rind is free of dents, cuts, bruises, or soft spots.  You also want a watermelon that is fairly symmetrical.  Next, pick the watermelon up.  It should be fairly heavy for its size because of its high water content.  Once you have found a heavy, symmetrical, dent free melon, the National Watermelon Promotion Board indicates that there is one more thing you should check.  Turn the melon over and check for a creamy yellow spot somewhere on the rind.  This is where the watermelon sat on the ground to ripen and is a sure sign that you have a high quality watermelon in your hands.

Are They Good For You?

There is no question that watermelon is refreshing, especially on incredibly hot summer days.  But most people think this providing a juicy, cool, refreshing treat is all watermelon are good for.  However, there is more to watermelon than meets the eye.  Watermelon contains lycopene, a cartenoid that may help prevent some types of cancer.  It is also a good source of Vitamin A, C, and B6.  According to the National Watermelon Promotion Board, these vitamins help promote eye health, boost the immune system, help break down protein, and promote the development of healthy blood cells.

Can Anyone Grow Watermelon?

Yes!  Watermelon can be easy to grow if you have the three essential ingredients – sun, water, and bees.   While the sun and water might be obvious, you may be wondering about the need for bees.  Bees are required to grow watermelon because the plants need to be pollinated in order to produce fruit.  Watermelons grow best in sandy fertilized soil and should be planted in rows that are at least 8 feet apart.  The plant itself is a vine and can grow as much as 8 feet in a single month.  It takes about 3 months for plants to go from seed to harvest and you can get an average of 2-3 fruits per plant.  Watermelon can also be grown without a lot of space if you pick the right variety and do a little extra work.  Check the VegetableGardener.com website’s section on how to grow watermelon for some ideas on how to grow watermelon in small spaces.

Great Ways to Use Watermelon

One Response to Wacky for Watermelon