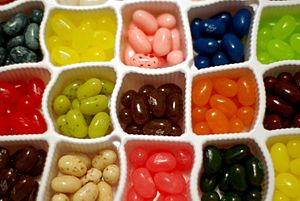 In preparation for National Jelly Bean Day which will be celebrated on April 22 this year, here are twenty facts about this fun and flavorful candy.

1. While no one really knows the origin of jelly beans, they may be a descendant of Turkish Delight which were popular in biblical times.

2. Jordan Almonds, which are the other possible origin of the modern day jelly bean are also made this way and were made popular in the 1600’s in France.

3. The first appearance of what would become the modern day jelly bean was promoted to Union Soldiers during the Civil War.

4. They use a process called “panning” which creates the hard outer shell while preserving the gooey middle.

7. There are 130 calories and 37 grams of sugar in one serving of jelly beans which equals about 35 jelly beans.

9. In the early 20th century, a “jelly-bean” was slang for a man of style and no substance.

10. Around this time, jelly beans became a regular penny candy offered at general stores and five & dime shops across the country.

11. They were the first candy to be sold by weight rather than by piece.

12. They were originally sold by color and people would buy a bag of red or a bag of green.

13. Peak jelly bean season is Easter, but that is a recent development which began in the 1930’s.

14. The jelly bean is associated with Easter because of its egg-like shape.

15. Each year in the U.S, there are 16 billion jelly beans manufactured just for Easter.  This is enough to circle the Earth more than 3 times if they were laid end to end.

16. They were President Reagan’s favorite candy and he used them to help him quit smoking when he was the governor of California.

17. As part of his first inauguration in 1981, 7,000 pounds of jelly beans were ordered and distributed.

19. Jelly Belly jelly beans became the first jelly beans in space when they traveled aboard the 1983 Challenger Space Shuttle.

20. Bertie Bott’s Every Flavor Beans from the Harry Potter books and movies are manufactured by Jelly Belly and include flavors like ear wax, pepper, avocado, marmalade and caviar.

While jellybeans are not featured on Fill Your Plate, it’s a good place to discover all the flavors of Arizona agriculture.