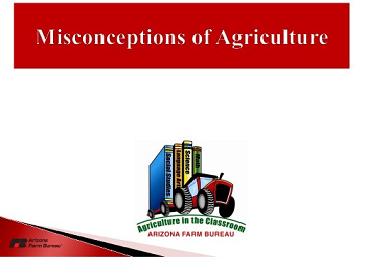 A 1-hour presentation was put together by Arizona Farm Bureau’s Agriculture in the Classroom (AZFB AITC) Program to dispel some of the misconceptions held by high school students. The program is ongoing and will be taught to vocational ag students throughout each school year.

Today, 310 million people live in the United States. This means a multitude of people with their own ideas and opinions about everything from who should be the next “American Idol” or “Dancing with the Stars” champion, to dieting and nutrition, to politics, and yes, even agriculture. With 310 million people having 310 million different ideas, there is a lot of room for misconceptions. Defined as an incorrect understanding or opinion, misconceptions are everywhere.

Our wakeup call to such a multitude of misconceptions came in the form of a youth contest. Last year, Yavapai County Farm Bureau (YCFB) hosted its 1st Annual Essay Contest for 4-H and FFA members, grades 7-12 across Yavapai County. “We have hosted an art contest for students grades K through 6 for the past four years and we wanted to offer something to the older students,” said Sharla Mortimer, YCFB Board Member. “We thought 4-H and FFA youth would be a great arena to pilot our contest.”

The contest was designed to see what local youth knew about agriculture. What YCFB found was disconcerting. The 48 essays submitted were found to contain much of the same misinformation about agriculture that can be heard spouted from news media, anti-meat, and anti-agriculture organizations such as the Humane Society of the United States (HSUS) and People for the Ethical Treatment of Animals (PETA).

Not one student got it right.

The Misconceptions of Agriculture

A 1-hour presentation was put together by Arizona Farm Bureau’s Agriculture in the Classroom (AZFB AITC) Program to dispel some of the misconceptions held by many of the essay writers. The presentation provided students with facts on organic and conventional food production, family and the so-called factory farm, genetic engineering, and hormone use in animals. Students also learned about Animal Rights organizations such as HSUS and PETA and caught a glimpse of the hidden agendas harbored by these organizations. Information for the presentation was taken from American Farm Bureau’s Misconceptions about Agriculture, Wesley Smith’s A Pig is a Rat is a Dog is a Boy, Humane Watch.org, usda.gov, and Betty Wolanyk’s “Addressing Misconceptions about Agriculture.”

Eighth-grade students learn about high-precision technology in agriculture from Farm Bureau member and General Manager for Booth Machinery Harold Maxwell. Often misconceptions about agriculture take root during a young person’s middle-school years if not given opportunities to learn about modern-day agriculture like these students.

To promote the newly formed presentation, AZFB AITC presented to a group of Arizona Vocational Education Teachers at their summer conference. To begin the presentation, teachers were provided with a handful of quotes such as “There are hidden prices in conventional food: medical bills” and “Organic livestock is definitely better; the animals are treated much better than the ones grown the conventional way.” Or, “Livestock on conventional farms are treated badly; they don’t get fresh water and they are cooped up in small confinements and don’t get to live the good life.”

When asked the demographics of where the quotes came from teachers responded with senior citizen groups, hippies, city folk, for example. They were shocked to learn that the quotes came from some of the same students they teach every day in their agricultural classes. Also shocked by the results of the essay contest: The University of Arizona (UofA) professors that were in attendance.

The Results are in

Nearly 1,000 students participated in the presentation, with 48 percent completing the questionnaire. The questionnaire revealed that of the 432 students that participated three-quarters were male and there was a relatively even distribution of students amongst the grade levels 9th-12th.  Like the general public, the majority of students were found to be two or more generations removed from the farm and ranch and reported that their agricultural experiences were from FFA and high school vocational ag classes.

To determine if student perceptions were changed by the facts that were presented during the presentation, students used a scale of very strongly disagree, strongly disagree, moderately disagree, mildly disagree, mildly agree, moderately agree, strongly agree, and very strongly agree to answer a series of questions. While the majority of students understood prior to the presentation that a person’s genes could not be changed by eating a genetically modified fruit or vegetable, they did not recognize that organically grown and conventionally grown foods do not vary significantly in nutrition value. What else did we find?

When given this statement on the pre-test students tended to mildly agree. After learning that families, family partnerships and family corporations account for 98% of farming operations nearly every student reported that they very strongly agreed that the so-called factory farms are actually family farms.

Corporate Farms produce more than half of our country’s food

This is a common misconception among Americans; it was also a misconception held by many students who participated in the research study. Students reported on pre-questionnaires that they very strongly disagreed with the notion that organic food production uses pesticides and fertilizers. What the students learned was that organic food production can and does use pesticides and fertilizers. They use natural fertilizers and pesticides as opposed to synthetic; one has not been found to be less safe then the other.

How would you have answered? Well, if you listen to the media and marketing of organic growers you might answer that you very strongly agree, just as the students did. But what if I told you that there are no studies showing any significant differences in nutritional value of organically and conventionally grown foods; would your answer change? The students did. On post and delayed-post questionnaires students reported that they very strongly disagreed that organic food is healthier than conventionally grown food.

The world can support more vegetarians than meat eaters

Student answers moved from mildly disagree to very strongly disagree after learning that only 10 percent of the earth’s land can support crop growth. Currently the world’s food supply is produced using 48 percent of the world’s available land, 10 percent crop growth and 38 percent grazing lands. Students learned that not all grazing land can support crop growth. If we were all vegetarians we would have to survive on the 10 percent. Is it possible?

HSUS shares how much of your donation with the local pet shelters?

Though HSUS has an annual budget that exceeds $100 million, they donate less than 1 percent of your donations to local shelters. Surprised? The students were! After learning that HSUS is a human society only in name and is actually an animal rights organization students were appalled. “I was shocked to learn that HSUS shares less than 1 percent of our donations to local pet shelters,” said one Buckeye High School Ag Student. “I will definitely donate to local shelters in the future.”

Working to Make a Difference

“One of Arizona Farm Bureau’s missions is to connect with the public and help Arizona families more clearly understand Arizona agriculture,” says Julie Murphree, AZFB’s marketing and ag education director. “But we need measurable results and programs that truly dispel misconceptions. Katie’s Misconceptions of Agriculture does exactly this.”

“A disconnect exists between what’s experienced in grade school on farm field trips and what Jr. High and High School students get exposed to through the vegan agenda,” says Amy Dillard, ag education teacher at Highland High School in Gilbert. “Having someone from the agricultural industry come into the classroom makes a big impact on our students. AZFB AITC cares enough to come into the classroom and teach the truth about Arizona agriculture. For ag teachers this is a huge help.”

Editor’s note: For complete results from the study visit the Arizona Farm Bureau. Select the Ag in the Classroom logo on the homepage to be taken to the survey results.

One Response to Perceptions Have Changed