How fortunate for chocolate lovers that Valentine’s Day and chocolate both celebrate in the same month! After all, what better way to brighten February than to share the day for lovers with one of the most loved foods in the world?

We are just a little late for National Chocolate Fondue Day, February 5, but that does not mean we can’t share two of the most interesting facts surrounding chocolate. First, the Aztecs were the oldest society to serve chocolate as a drink. Second, they mixed it with hot chili peppers! 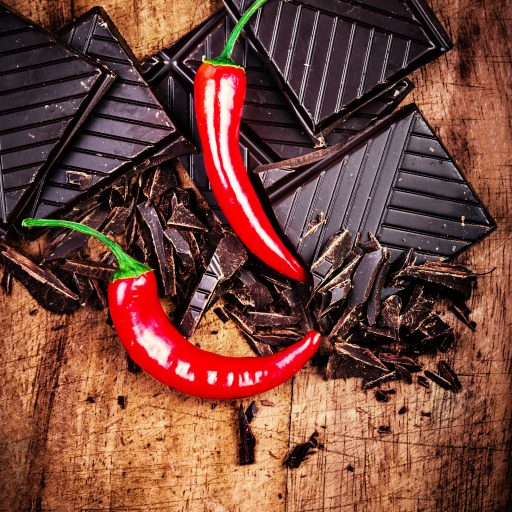 Historians believe that chili peppers – and chocolate – were first found (by explorers like Christopher Columbus) in and around Mexico. The Aztecs and Mayans  called them ‘chiles’ and ‘cacao’.

The burning sensation, or taste, in chili peppers is the result of capsaicin, a flavinoid secreted in the stem and collected in the ‘ribs’ of the chili. The ratio of capsaicin varies considerably from one type of pepper to the other. This heat is measured in Scoville Heat Units, or SHUs.

Cocoa bean bushes did not migrate, but chilis, or chiles, did, thanks to human intervention. The most important transplants went to the American Southwest, particularly Arizona, where hot sun, fertile soil, and adequate moisture has created some of the hottest and most flavorful chili peppers anywhere in the world.

There are six main varieties of capsicum, the Greek name for the species. The name means ‘to bite’, and some varieties of pepper do just that! Bite the tongue, that is, with a fiery nip that takes some getting used to. Aficionados simply grin and bear it, though not all can hide the flushed skin and sudden, sometimes profuse, sweating!

Some of these varieties are foreign, but your chances of finding them improve if you visit Chile Acres Farm, which boasts of 16 varieties of chili peppers, as well as sundry other foods like goat cheese. Other growers include K&B Farms, Apple Annie’s Produce & Pumpkins, and Mortimer Family Farms.

For cooks, both professional and domestic, Fill Your Plate also offers a number of unique and Arizona-specific recipes for chili peppers. Choose from an Arizona quiche or spicy hot zucchini patties. Whatever your choice, you are sure to enjoy the intense but never overpowering zing chiles add to food.

Important as the flavor of chili peppers may be, the range and scope of their health benefits are even more significant. For example, capsaicin itself is antibacterial and helps prevent everything from cancer to diabetes. It is also a pain reliever, and capsaicin ointment is available over-the-counter for major sports- or arthritis-related discomforts.

So much good from such a small fruit (yes, chiles are a fruit, related to the nightshade family, which includes potatoes and tomatoes)!

Have you had your 3-5 USDA-recommended servings of fruit today? If not, why not start with the hottest products on your grocer’s shelves? Chiles, to be exact.