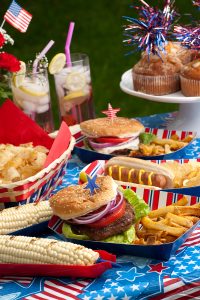 Farm Bureau’s informal survey reveals the average cost for a summer picnic for 10 is $58.72, or $5.87 per person. That’s about a 5-percent increase compared to a year ago.

“Despite some modest price increases over the past year or so – meats, especially – most Americans should be able to find summer picnic foods at prices close to the averages found by our volunteer shoppers,” said John Anderson, deputy chief economist at AFBF.

“Retail meat prices are higher compared to a year ago because the nation’s cattle herd is now at a historically small level,” Anderson said. “The total number of hogs farmers across the nation are raising is also down, which has contributed to higher retail prices for pork products.”

Although consumers will pay a bit more for their Independence Day picnics, finding delectable meat cuts and ingredients for side dishes will not be a problem.

“As a nation, we continue to enjoy a consistent, high-quality supply of meats and poultry that can be grilled or prepared any number of different ways. The whole array of home-grown foods Americans typically enjoy in the summer also is in plentiful supply,” he said.

A total of 84 Farm Bureau members (volunteer shoppers) in 25 states checked retail prices for summer picnic foods at their local grocery stores for this informal survey.

AFBF is the nation’s largest general farm organization with member families in all 50 states and Puerto Rico. Learn more here or follow @FarmBureau on Twitter.