Is it Good to Go Gluten Free? 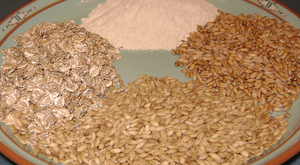 In case it has somehow escaped your attention, there is a lot of talk right now about gluten and who should or should not be eating it.  On the surface, gluten-free may seem to be just another nutritional craze or wonder diet, like something a celebrity would credit with helping them lose those last 10 pounds in just 10 days on the cover of a grocery store tabloid.  All the buzz may make it feel like a fad but for those who struggle with celiac disease or gluten-intolerance, going gluten-free is much more than the next new thing in healthy eating; it is a major life change undertaken to address a real medical condition.

November is Gluten-free Diet Awareness Month which provides the perfect opportunity for us here at Fill Your Plate to help sort out the facts from the fiction about going gluten-free.

Is Gluten Bad for Us?

To start, let’s talk about the culprit here, gluten, the protein that gives bread its elasticity and chewy texture.  Gluten itself is neither good nor bad for us.  It comes from processed wheat, rye, and barley, and is found in much of the processed food we eat today.

Will Giving Up Gluten Make You Thin?

Unfortunately, eating a gluten-free diet is not a way for most people to lose weight.  In fact, many experts agree that giving up gluten is much more likely to cause weight gain rather than weight loss.  This is one of the most common misconceptions about going gluten-free based in large part on the stories of celebrities who got their amazing bodies by living a gluten-free lifestyle.  For some celebrities, skipping gluten may help with their overall health because of an actual allergy or sensitivity to this protein, but for most of them and most of us, the key to any weight loss, gluten-free or not, can be found by looking at what we are and are not eating.  In many cases, people who lose weight by giving up gluten do so because they stop eating things like bread, cookies, cake, and other high calorie foods that just happen to contain gluten.   It is not giving up the gluten, but rather the calories they are giving up that helps them lose weight.

Nutritionists and other experts on gluten sensitivity and celiac disease say that most people actually gain weight when they go gluten-free and that switching to gluten-free bread, cookies, and cake can increase people’s caloric intake by two or three times if they are not paying attention.

Who Needs to go Gluten-Free?

Anyone with celiac disease, which is an allergy to gluten, or a gluten intolerance/sensitivity, should be gluten-free.   Although these terms have historically been used synonymously, they are three separate and distinct conditions.  Celiac disease is an auto-immune disorder that requires adherence to a life-long gluten-free diet.  Gluten intolerance is not caused by an allergic reaction or an autoimmune response although it often causes the same symptoms as celiac disease.  Those who believe that they may have gluten sensitivities should speak with their doctor about their symptoms and follow their advice about testing, diagnosis, and treatment.

The bottom-line is that going gluten-free won’t hurt you but unless you have a gluten allergy or intolerance, it isn’t likely to help you either.  While following a gluten-free diet is currently a weight-loss fad for famous people, most of us are more likely to lose weight if we are checking our food labels to see how many calories it contains rather than whether or not it contains gluten.