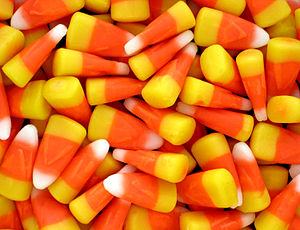 Check out some interesting, and fun, facts about an American favorite, candy!  (Photo credit: Wikipedia)

There is no question that Americans love candy.  We give it to those we love on Valentine’s Day, get it from the Easter Bunny on Easter, ask our neighbors for it on Halloween, and get a stocking full of it from Santa at Christmas.  We eat it at the movies, we eat it at home, and we even eat it all year long while we drive around in our cars.  There isn’t a single thing that candy doesn’t seem to make better, except maybe our next visit to the dentist!  June is National Candy Month and we thought it would be fun to find out the most interesting facts about the one snack everyone can always agree on, candy.

3 Responses to Fun Facts About Candy