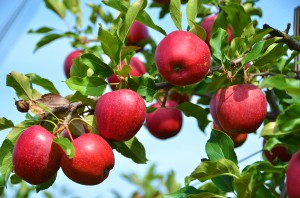 Be sure to try one of these delicious recipes using in season apples (photo credit: BigStockPhoto.com)

Apple season is just around the corner and this year looks to be one for the history books.  Experts are predicting the third largest apple crop in U.S. History despite the fact that two of the primary apple producers, Michigan and New York, are expecting a lighter yield than normal.  The U.S. is expected to produce 260 million, 40 pound boxes this year which may send apple prices falling unless the major producer can arrange for additional exports.

Washington state, one of the top producer’s in the country is expected to produce 150 million, 40 pound boxes of apples this season which is significantly higher than the previous record for the state set in 2012.  It is this extraordinary Washington crop that has pushed this year into the top three of all time.  If New York and Michigan had experienced even a normal year, there is no question 2014 would be the year with the largest apple crop ever.

Here in Arizona, apples also have a strong showing.  Although not one of the major crops produced in the state, apple orchards are springing up all over the Southeastern part of the state.   This means you will be able to find apples at many of the farmers markets throughout the state beginning in mid-late August.

The apples grown in Arizona are known for their sweet crisp flavor and they make great additions to salads, snacks, and breakfast plates.  One of the great things about apples is their versatility.  They can be eaten as is, sliced, peeled and sliced, chopped, mashed into sauce, and they go with just about any dish at almost any meal.

As we head toward the autumn, make sure to take advantage of the huge crop to stock up on delicious, healthy, Arizona grown apples.  You can find them at the local farmers market or in the bins at your grocery store.    From apple pie to apple sauce, make this August all about apples with these delicious recipes featuring Arizona apples.

Share This:
This entry was posted in Fruit, In Season. Bookmark the permalink.