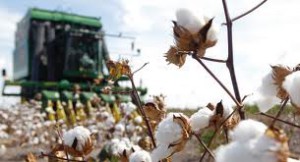 If your only exposure to American culture was television or the movies, you would likely have a skewed view of American women.  It would be easy to think that most of them spend their days climbing the corporate ladder clad in the latest Gucci suit and $500 shoes and that those who aren’t doing that, wish they were.   But contrary to this stereotype, not every American woman aspires to live like the women on Sex in the City, collect designer clothes, or sip Cosmos over sushi.  The founders of Women in Blue Jeans, a group committed to celebrating the women of rural America and providing them with educational and networking opportunities, know that some women prefer a life where blue jeans and work boots are always the appropriate attire.

Arizona farmers love talking about denim and blue jeans since we grow some of the best cotton in the nation. Arizona farmers annually contribute this cool, comfortable fiber to our constant demand for blue jeans.

This January 19th is Women in Blue Jeans Day, a time to celebrate all the women who grow the food we eat, tend the animals we need for dairy, eggs, and wool, and those who choose to live a different kind of life far from the hustle and bustle of the city.  It is a day to acknowledge the role rural women play in keeping America running from the barn and the field rather than from the board room.

The Importance of American Agriculture

According to the American Agri-Women, a national coalition of organizations focused on women in agriculture, there are more than 2 million family run farms in America.  These farms produce 86% of the food and fiber made in the USA and are the reason families across the country spend only 10% of their income on food, the lowest in the world.  These farms produce more than just food and fiber; they also produce the necessary materials for many other things including medical supplies, cosmetics, crayons, x-ray film, ink, and toothpaste.  American agriculture only continues to grow in importance both in terms of access to safe, healthy food and from an economic perspective as shown by these facts from American Agri-Women:

The most recent Census of Agriculture indicates that more women are working in agriculture than in previous years.  The census showed increases in the number of women operating farms, the number of acres women are farming, and the value of the products women are producing over the previous report.  More than 30% of the 3.3 million farm operators in the U.S. are women and in 2007 14% of American farms were run by women.  Information from the last two censuses show that women continue to play a central role in the farming and ranching industry:

Here in Arizona, where women farmers are prevalent, the Arizona Farm Bureau’s Women’s Leadership Committee exists to develop women’s individual talents as leaders through involvement in a variety of programs on the local level. These programs are directed toward leadership development, political influence, and promotion of Arizona Agriculture through education in the classroom and in the community.

This January 19th, take a moment to thank a woman farmer or rancher you know for tending the land, caring for the animals, and keeping food on your table.  Connect with Arizona women farmers and ranchers on Fill Your Plate (https://fillyourplate.org/) and the Friends of the Arizona Farm Bureau’s Facebook page. (http://www.facebook.com/ArizonaFarmBureau?ref=ts)