Then and Now: Food Prices Over the Past 100 Years 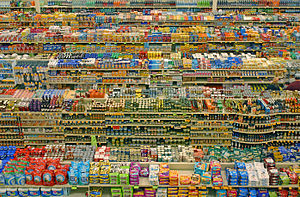 There are drastic differences in the food people at in 1913 and the food we eat today. (Photo credit: Wikipedia)

There is no question that things have changed more in the last 100 years than they did in any other 100 year span in history.  From the atom bomb to the smart phone and the moon landing to the color TV, the lives of American families have changed so significantly since 1913 it is difficult to draw any comparison between the two.  In 1913, women couldn’t vote and generally didn’t work outside the home.  Modern conveniences like home refrigeration, television, computers, and even landline telephones had not yet been invented or were not available to most households.  Studies show that only 60% of children aged 5 to 19 were enrolled in school in 1913 and only 9 out of every 100 17-year-olds graduated from high school. Today, all children under the age of 16 attend some kind of school and in 2010, 90 out of 100 18-25 year olds had graduated from high school.

There are also drastic differences between then and now when it comes to the food we use to fill our plates.  In 1913, there were no frozen pizzas, microwave dinners, or juice boxes.  Most of the food a family consumed was made at home from standard staples.  By today’s standards, food prices were incredibly cheap and as our grocery bills seem to continue creeping ever upwards, it might be easy to long for those simpler, seemingly cheaper bygone days.  The thought of buying a gallon of milk for $.37 or a pound of potatoes for $.02 might make a life without cars and cell phones seem even more ideal, but the price comparisons can be misleading.

In a recent report from the Bureau of Labor Statistics (BLS), the current price of common food staples was compared with the prices of those same items in 1913, the first year this data was collected.  As expected, things cost a lot more now than they did back then.  However, even though it may seem the price of food has skyrocketed in recent years as a result of Mother Nature and global recession, analyzing the numbers in the report tell a different story.   Here are some of the key comparisons from the BLS report:

If you look just at the change in price, it looks like the price of food has simply skyrocketed over the past 100 years with average cost of most staples rising by more than 1000%.  But this doesn’t tell the real story.  In order to understand if we really pay more or less for our food than our ancestors did 100 years ago, we have to look at our buying power, not just the prices paid.

In today’s world, many American households have two incomes, which is very different from households in 1913.  On average, each household in 2012 had 1.38 people working who brought in a median household income of about $44,389 which equals about $32,800 for one worker.  That is about $32,000 more than the median household income in 1913 or a 4100% increase.   If you take this into account, it is easy to see that the 14% of our household income we spend on food is a much less than what families in 1913 spent on their food.   So even though we can’t buy a pound of potatoes for $.02, we spend less of our income on potatoes even though we pay $.63 for the same pound.

For an updated list of current food prices in Arizona, regularly check Fill Your Plate for the latest on Arizona food prices that are reported quarterly.

One Response to Then and Now: Food Prices Over the Past 100 Years