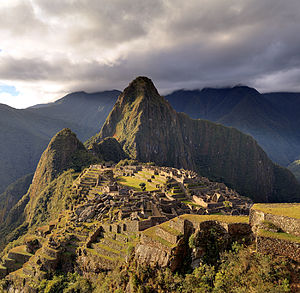 Peruvian cuisine has taken the recent spotlight in the last few years and the momentum is not expected to slow down any time soon. (Photo credit: Wikipedia)

This article originally appeared in the January/February 2013 issue of Foodie News, brought to you by the Public Relations Department of the American Farm Bureau Federation.

While the regular celebrity chef lineup was present at the recent South Beach Food & Wine Festival, there was an extra flare this year as Latin American chefs stepped into the limelight.

The flavors of Latin America are hardly foreign to many palates in the United States, but experts predict that we’ll see more influence from south of the border in our food in 2013.

In South Beach, several events were held showcasing cuisines from Latin American countries including Colombia, Cuba and Peru. Peruvian chef Gastón Acurio, owner of Astrid & Gaston in Lima, which has been ranked one of the 50 best restaurants in the world, co-hosted “Pescado and Pisco: A Taste of Peru.”

Peruvian food has been taking the spotlight in the past few years and the momentum is not predicted to slow down any time soon. SushiSamba, which has five locations, fuses Japanese, Brazilian and Peruvian flavors.

In USA Today, Brazil-based travel writer Kevin Raub said that while Peru has been the trendiest cuisine of South America in recent years, he believes Brazilian food is more diverse and complex. “It amazes me that the moqueca, a seafood stew based in coconut milk and dendê oil, has yet to cause a culinary stir globally. It’s an entire country’s identity in your mouth,” he said.

Spicy flavors are going to become more prevalent, showing up in items such as popcorn and potato chips. Sour citrus flavors will be popping up in a variety of dishes—keep a close eye on the increasing popularity of ceviche, a seafood dish flavored and cooked by the acid in citrus.

Further, chorizo, a pork sausage from the Iberian Peninsula is going mainstream. Recently it made an appearance on IHOP menus around the country. And a vegetarian-friendly version of the sausage made with soy protein is now sold at Trader Joe’s.

At the foundation of America’s Latin food palette is the familiar taco, which will be getting a makeover in 2013.

In New York City, chefs April Bloomfield and Roberto Santibañez recently opened Salvation Taco featuring tacos containing roasted cauliflower with curried crema; crispy sweetbread with chickpeas; and Korean BBQ. Chef Rick Ortiz opened Antique Taco in Chicago and Michelin is calling it one of the best values in the city. The menu at Antique Taco includes a mushroom taco with pumpkin seeds, smoked onion cream, arugula and purple onion; and a grilled ribeye taco with caramelized poblanos and onions, cilantro and cheese wiz. Travel writer Jill Robinson thinks that the popularity of tacos will evolve into an American taste for panucho, a puffed tortilla filled with refried beans.