Food FYI: Should You Wash Your Chicken? 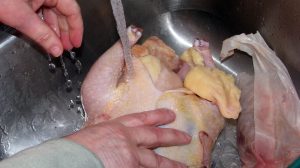 Do you wash your chicken before cooking it? (photo credit: bigstockphoto.com)

If you are like most home cooks in this country, you take a page from the past when it comes to cooking chicken and you rinse the raw meat off in the sink as part of your meal preparation.   This common practice was handed down from mother to child, promoted by famous foodies like Julia Childs, and is often found as step one in recipes related to chicken.  We do this, rinse the chicken and then pat it dry with a paper towel, in order to remove any bacteria and germs from the bird that might contaminate the kitchen while we are cooking.  However, new research indicates that washing chicken might actually be doing more harm than good.

Everyone knows that one of the biggest dangers of raw poultry is salmonella, bacteria that causes food-borne illness resulting in diarrhea, fever, and abdominal cramps in most people.  It generally takes about 12 to 72 hours for symptoms to start and most people will recover completely within a week.  However, the symptoms can be severe enough to warrant hospitalization and the infection can spread throughout the body and be life-threatening.

According to the Centers for Disease Control, more than 40,000 cases of salmonellosis, the illness caused by salmonella bacteria, are reported each year.  However, since less severe cases are not always reported, the actual incidence of infection is believed to be much higher.   Given the number of cases and the risk of developing a life-threatening illness, it is no wonder so many of us are happy to follow age-old advice that aims to decrease the chances of getting sick.

Unfortunately, a new study shows that when you wash your raw chicken you are actually increasing your chances of salmonella contamination.  With funding from the U.S. Department of Agriculture (USDA), Jennifer Quinlan from Drexel University performed a study to determine if washing poultry helped increase food safety.  Her findings show that when it comes to food safety, our mothers and grandmothers didn’t always know best.

Washing can result in the bacterium becoming aerosolized which enables it to travel through the air and contaminate surfaces without any direct contact.  This is similar to what happens when someone has a cold or the flu and sneezes.  The small liquid droplets carrying the illness get spread around a wide area where they can be picked up by someone touching a contaminated surface.  When the water from the sink splashes over the raw poultry, the same thing can happen, making contamination more likely than if washing was skipped entirely.

For more information on food safety and safe handling instructions for poultry and other foods, visit FoodSafety.gov.