The Changing Face of the Farmer’s Market 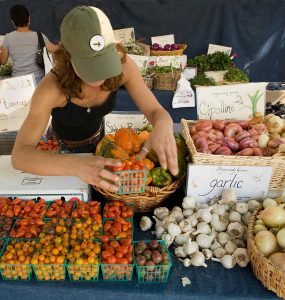 Check out these new ways Farmer’s Markets are adapting to their clientele (photo credit: BigStockPhoto.com)

The number of farmers’ markets both here in Arizona and across the country has continued to grow as the demand for locally grown, seasonal produce and locally raised meat and dairy products has increased.  According to the Agriculture Department, the number of farmers’ markets grew almost 4% in 2013.  The continued growth is due in part to the increased demand but is also attributed to the fact that consumers are more likely to trust that the food they buy at a farmers’ market is grown locally than food with the same claim sold anywhere else.  For many people, being able to interact with and build a relationship with the person, people, or family that is producing their food is the key to building that kind of trust.

Although the growth rate in 2013 was somewhat smaller than the explosive growth seen in previous years, this is believed to be the result of achieving the right balance between supply and demand in some areas rather than a downward trend in demand.  Additionally, some growth may have been repressed because there are areas without adequate farmers’ market coverage that simply do not have enough local vendors to make a local market work.

The best news for consumers about the continued, albeit slowing growth is that as these markets mature they are looking for new and better ways to support vendors and provide the kind of experience their patrons appreciate.  This has opened the door to some interesting and inventive farmers’ market concept across the country.

Another popular trend is small, mobile markets that function kind of like a lunch truck, moving from place to place in order to be easily accessible for large groups of people like factory employees or the residents of large office buildings.  Even better news is that farmers’ markets are making their way into areas of this country where access to fresh produce and locally grown products has previously been limited or non-existent.  This means that people who struggled to gain access to the healthy fruits, vegetables, and other local products frequently found in farmers’ markets and in high-end grocery stores can get the same benefit from buying locally.

Here in Arizona we have a thriving farmers’ market community with more than 80 farmers’ markets operating across the state.  You can easily locate the market closest to you by using the “Farmer’s Market” search feature available on Fill Your Plate.