Cacti of Arizona: The Saguaro

As a native to Arizona, I am very used to seeing those crazy-looking things called ‘cacti’ everywhere. They are in people’s yards, along freeways and in pots on people’s desks among other places. There are many different kinds throughout the world, and here in Arizona we are lucky to have a type of cactus that only grows here, as well as in the upper part of Mexico and a tiny southern part of California. It’s called the saguaro and it is native only to the Sonoran Desert, which is a vast desert that stretches between Arizona, Mexico and California. Today I’m going to discuss the saguaro and all of its fun facts! Before we begin, let’s go over what a cactus really is and touch on some facts about the desert plants. 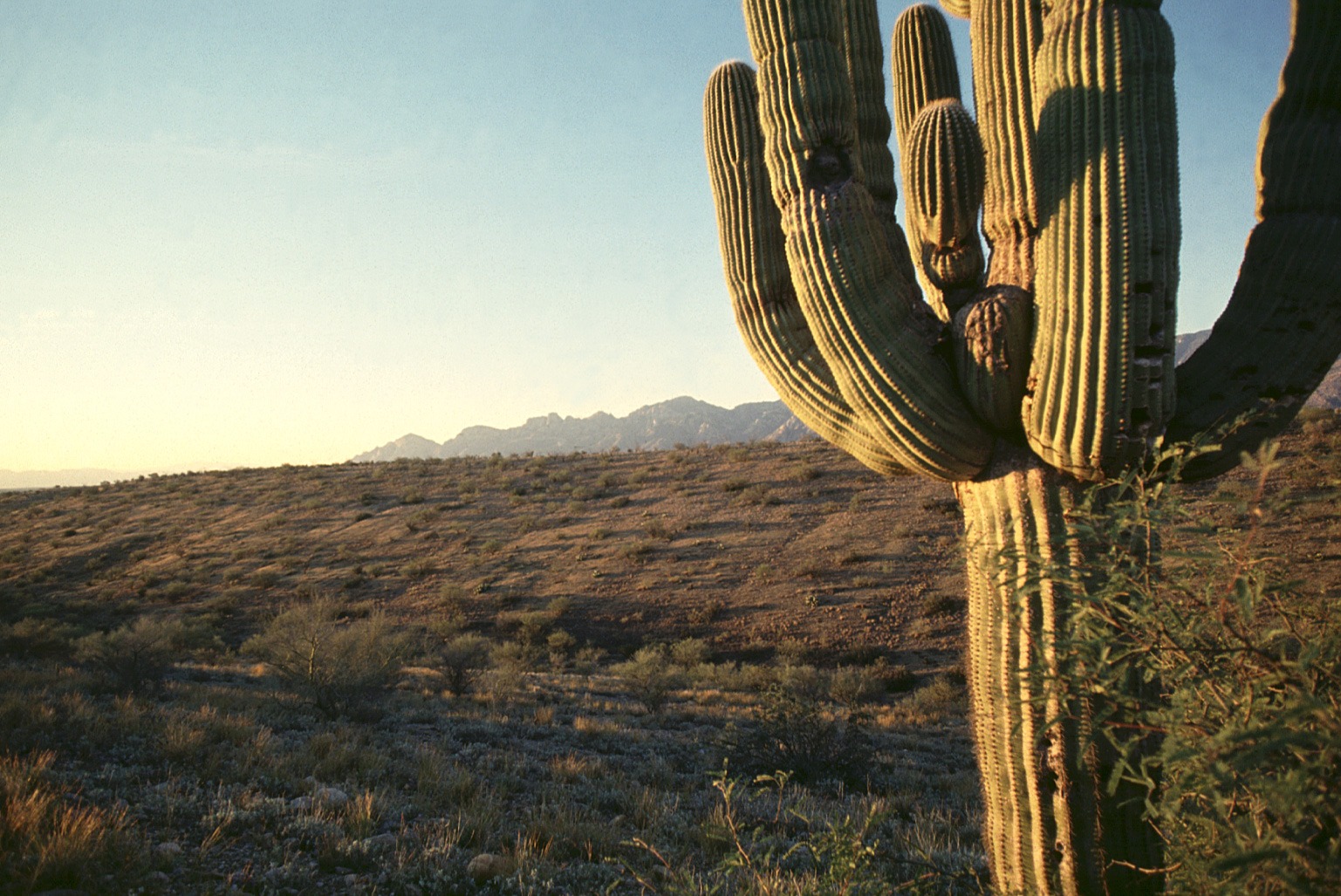 A cactus is a succulent plant which grows only in dry, warm regions. They lack leaves, but make up for it with their spines and needles. Cacti have a shallow root system that usually stretches out right under the ground’s surface, which is perfect for collecting rain water quickly; and if you look closely at a cactus, their bodies seem to be ribbed. This is another feature designed specifically for the rainy season. The cacti need those ribs so they can expand after soaking up water during heavy rains. Some types of cacti grow edible fruits on them at certain times of the year which can be eaten as they are, grilled, and even made into jam. (Never eat any parts of a cactus that you are unfamiliar with). There are around 2,000 different kinds of cacti which range from the towering saguaro to the tiniest cactus of them all, the blossfeldia liliputana, and every single one of them has characteristics that make them unique from all other cacti.

So let’s talk about the saguaro. It is pronounced like sah-wah-roh, and it is the largest type of cacti in the United States. Typically, saguaros grow to be between 15 and 50 feet, with some cacti looming upwards of 70 feet over the desert below. The lifespan of these majestic plants is between 150 and 200 years old with a little variation because they can be knocked down by strong monsoon winds, cutting their lives short.

The saguaro cactus is famous for its unique silhouette, in which is shows off it’s, usually many, arms. There are many myths out there about the saguaro cacti’s arms. Some people say each arm indicates how many years the cactus has been alive, when in reality, they just grow arms every once and a while, usually after they have passed the 75 year mark in age. Most saguaros only have a handful of arms, but they are capable of growing more than 25 arms in their lifetimes. These arms, and even the body of the cactus, can sometimes be seen with multiple holes carved into them. This was all the work of birds! Birds like the Gila woodpecker dig out holes in the cactus to make room for their nests. They let the inside of the hole dry out for a while and then move into their new home to lay their eggs and raise their babies.

Other than being very beneficial to their surrounding wildlife, the saguaro cacti have been important in Arizona culture and history for a very long time. Native tribes from Arizona used to collect the saguaro’s fruits in the spring and make them into jellies, jams, and even wine. Today you can find saguaro cactus fruit jelly in specialty stores all around the state. Another cultural influence the saguaro has had in Arizona is it’s prominence in the Tohono O’odham culture. These people, who have been in the region and made use of saguaros for thousands of years, lived off the cactus, and even had their own creation story for the beautiful plant.

Another aspect of these cacti that has cultural significance is their flowers. The saguaro cactus blossom, which only blooms in May and June, is Arizona’s state flower. It is a bright white color with a yellow center, and grows on the ends of the cacti’s arms as well as on the top of the cactus’ body. With the flowers only blooming during the night and through the early morning, it can sometimes be hard to catch a glimpse of the beautiful white petals. If you are ever so inclined to make the moonlit journey to see these flowers, you are in for a treat!

Why We Protect the Saguaro

Anyone who lives in Arizona has heard that there is a hefty punishment that comes with the destruction or removal of a saguaro. I’ve heard everything from a $2000 fine, to upwards of 25 years in prison; and while there are repercussions that come along with the inappropriate handling of the cactus, they are in no way close to the rumors that have circulated through the years. In the Arizona Revised Statutes it is stated in 3-932 that if a “person knowingly removes or destroys any protected native plants from private or state land,” they can be charged with anything from a certain class of felony to a certain class of misdemeanor; some of these charges to result in jail time, and almost all result in fines. So here’s a word of advice: Don’t try to steal the cacti!

The saguaro is what people think of when they think of Arizona. The cacti’s iconic arms silhouetted against the sunset will forever be the postcard people search for to send home as a reminder of the beautiful place they visited. Some people will never be able to visit them at all. So the next time you are driving through the desert, take a moment to look out at the sea of saguaros, admire them, and realize how very lucky you are to have them.

One Response to Cacti of Arizona: The Saguaro