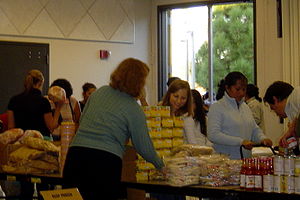 New law will make it easier for farmers to donate their crops to charity. (Photo credit: Wikipedia)

Last week, Arizona Governor Jan Brewer signed into law a bill that aims to increase fresh produce donations directly from farmers to food banks and other charities.  Arizona produce farmers will now be able to receive tax deductions if they donate some of the crops they produce — literally giving away the fruits of their labor to the hungry.

Building on the spirit of giving, the law revises previously complicated rules for the donations in hopes of boosting charitable contributions. Sponsored by Arizona Senator Steve Yarbrough (R-Chandler), the new law will apply to all 2012 tax year Arizona-grown produce donations.

“I am very pleased and appreciate the action whereby Gov. Brewer signed my Senate Bill 1121. This bill will make farm produce donated to food banks easier to accomplish and will greatly benefit some of the most needy in our society,” said Yarbrough. “I applaud Western Growers for urging this legislation.”

The bill was also supported by Arizona Farm Bureau. “It’s a win for people,” says Government Relations Director for the Farm Bureau Joe Sigg. “People to people with the in between medium of food. At the same time it respects the business of food production.”

Arizona food banks are also excited about the new law.

“We’re looking for good, solid nutritious food. And fresh produce, you can’t hardly get any better than that,” said Ginny Hildebrand, president & CEO of the Association of Arizona Food Banks. “We’re really excited about the potential of this law. What we know is that these growers and owners of fresh produce products in Arizona have one purpose in mind—that is to feed hungry people. They don’t grow product to see it wasted.”

Previously, mounds of paperwork had to be submitted to earn a tax deduction. The new law makes any produce donation deductable. The wholesale market price of the commodity donated is used to figure deductions.

With 10 of Arizona’s top 16 commodities falling into the fruits, nuts or vegetables category, the opportunities for partnership between the state’s food banks and produce farmers will seem more likely.