Can Prunes Help Whittle Your Waistline? 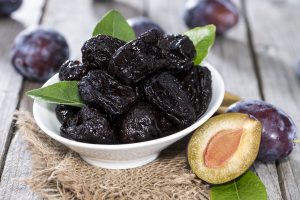 Prunes are a healthy addition to many recipes to help whittle your waistline away. (photo credit: BigStockPhoto.com)

If most of us think of prunes at all, we think of them as something senior citizens eat because of their high fiber content.  But a new study may have everyone talking about prunes as the next weight loss “superfood”.   According to research from the University of Liverpool, eating a couple prunes each day can help keep you from getting hungry and make it easier to lose weight.

The intent of the study, which included 100 participants who were either overweight or obese, was to determine the effect of prunes on weight loss.  In addition to being overweight, all participants were also low-fiber consumers. The goals of the study were to understand if including prunes as part of a weight-loss diet had any effect on weight reduction, to determine if people who were low fiber consumers could tolerate eating large quantities of these high fiber fruits, and to see if eating prunes had any effect on appetite.

The study spanned a 12 week timeframe where participants were separated into two groups.  One group consumed a specific amount of prunes everyday as part of their regular weight loss diet.  The other group was given advice on how to select healthy snacks, but there was no mandatory intake of prunes.

The findings indicate that eating just 5-6 grams of prunes everyday has a demonstrable effect on weight loss.  Those in the prune group lost almost twice as many pounds over the 12 week period as their healthy snack peers.  On average, the prune group members lost 2.5 kg or about 5.5 pounds while their non-prune eating peers averaged about 1.5 kg or 3.3 pounds lost over the length of the study.

In addition to the difference in weight loss, those participants in the prune group saw an increase in their rate of weight loss in the final weeks of the study.  They also reported experiencing greater feelings of fullness.  None of those in the prune group had any difficulty tolerating the high fiber food even though they generally ate low fiber diets.

The research team believes that one of the main reasons the prune group lost more weight was because the high-fiber prunes helped reduce hunger and control appetite by making participants feel fuller, longer.

These findings indicate that including prunes as part of an overall weight loss/management strategy may help those who are overweight or obese lose more weight than they would by following the same diet without the prunes.  This will change the conventional wisdom that generally omits dried fruit from weight loss and weight management diets.

For ways to get some prunes onto your plate, try these great recipes featuring the fiber-rich dried fruit.