Over-consumption is a problem in America that has been prevalent for decades. However, the topic of overeating usually only revolves around the actual food that is being consumed. The choice of food is definitely an important factor in the research of overconsumption, but there are many other factors that go into the reasons why people tend to overeat. Environmental factors play a big role in influencing consumption intake.

Some people are defensive against the notion of environmental factors influencing consumption because they believe that they are fully in control of their diets. Although it is true that some individuals are capable of eating the correct amounts of food, it would be foolish to ignore the environmental factors that affect the majority of the population.

Reviewing some of the factors that influence the amount of food you consume could be beneficial to you and your family’s health. It can be shocking to realize how often we overlook these influencing factors, so hopefully, this will give you some insight into what some of the factors in your own life might look like.

What are some of the factors that influence your own consumption volume? It may be hard to pinpoint exactly what drives some of us to overeat but breaking down those environmental factors into situational examples can be a good starting point.

Where we choose to eat matters a lot. It not only matters about the actual food we eat but about the atmosphere of the eating environment. Temperature, lighting, odor, and noise all play a role in how much food we consume. Studies suggest that if people are eating in an environment that has high temperatures, they are less likely to overeat than if they are in cold temperatures. The possible reasoning behind this is because more energy is required by the body to regulate its core temperature.

Lighting can influence consumption by increasing or decreasing the length of mealtime and also increasing or decreasing a person’s comfort level. The duration of mealtimes can increase in dimmed lighting because comfort levels rise, and they can decrease in bright or distracting lighting because people are more likely to feel self-conscious or put off by the lighting. Odor and noise seem like more obvious factors that could influence the amount of food consumed. Say you’re at a restaurant and you’re holding a baby who needs a diaper change and is crying their little eyes out. I think it’s safe to assume that you probably wouldn’t be staying for dessert. However, if the noise and odor weren’t an issue, you might be inclined to stay for dessert and even another drink. Everything around us affects how much we eat; we just have to look for those factors.

The more effort that is typically involved, the more people tend to not overconsume. It also works in the opposite direction. If obtaining a certain food requires little effort, overconsumption is more likely to occur. A study performed in a cafeteria showed the effects of this factor. The study revealed that people ate more ice cream when the lid was removed than when it was closed. Another study showed that people ate almonds more frequently if they were already shelled than if they were unshelled.

When eating with people that you feel comfortable around, it is more common for a meal to be extended than if you were around strangers. Studies have also shown that student’s food preferences and the amount they consume are affected by how much their peers consume.

Watching a movie or television show can lead to overconsumption because it distracts the person from monitoring how much food they have eaten. More importantly, this situation can easily become a habit and lead people to associate those scenarios with food. Personally, this factor greatly affects my life because I became accustomed to mindlessly eating while watching television. If I go to watch a show, I always feel the urge to grab a snack. You can see how unhealthy this is if I’m constantly snacking during a show.

This environmental factor is probably the sneakiest one of them all. Portion sizes have been increasing steadily for the past 30 years. Just look at the difference in bagel size from the 1990s (left) to now (right). The calories went from around 140 to 350, more than doubling the amount consumed. 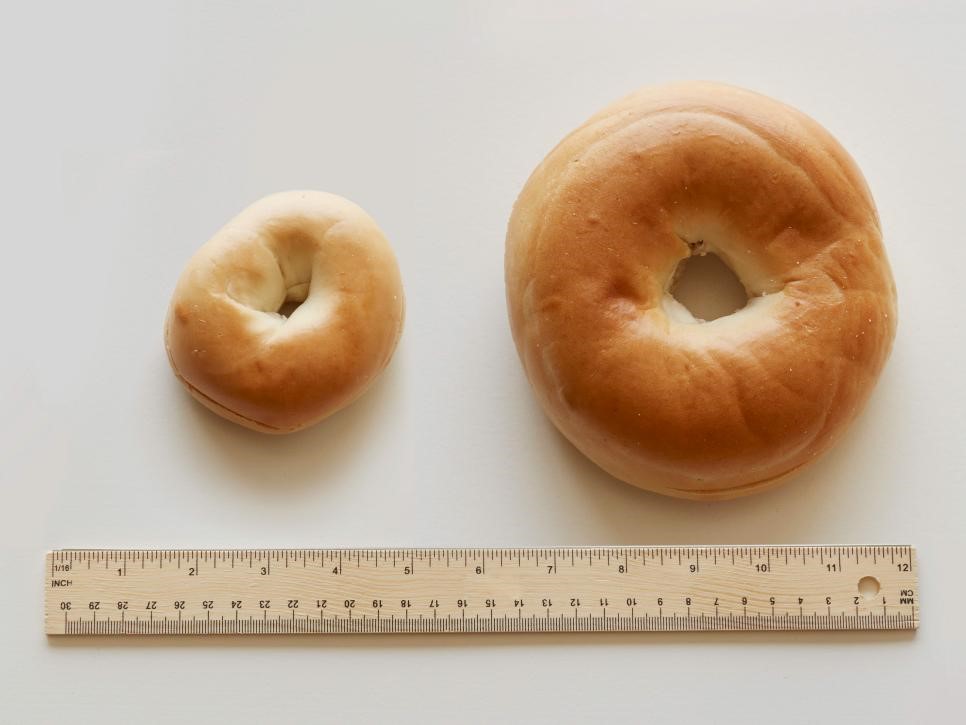 Here are some tips to help you alter your eating and food environments:

Fill your plate has many wonderful resources for a healthy lifestyle. Check out the recipe section or the produce in season tab for more information