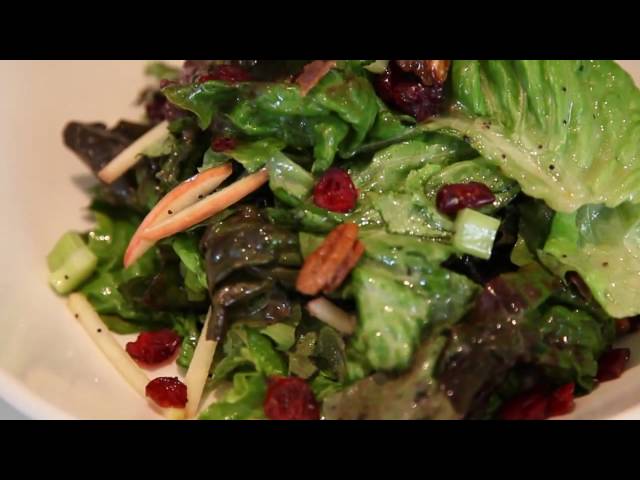 Editor’s Note: This article originally appeared in the Arizona Republic. With the author’s permission we publish the story here.

Spring has sprung and in Arizona that means gorgeous days, busy gardeners and wonderful greens from the earth. An amazing spring salad with a sweet and tangy Poppy seed dressing seemed like the perfect way to kick off the season.

The story behind this bowl of greens makes it even more special because the lettuce, apple, pecans, celery and lemon are all part of a booming agriculture industry that’s now bringing $10.3 billion into this state’s economy each year. The area where I found this recipe (adapted from an Arizona farm family cookbook) was Yuma, which is known as the Winter Lettuce Capitol of the World with more than 200,000 acres of farmland producing crops.

In fact, with 15,000 farms and ranches statewide, Arizona now ranks number two in the United States in production of romaine, head lettuce leaf lettuce, cauliflower and broccoli. Arizona and California together produce more than half of all the fresh fruits, vegetables and tree nuts that are eaten nationwide. Wow. Arizona’s gone large-scale agriculture!

So this is why I wanted to share this tasty recipe, from Mary Jean Klingenberg’s Yuma Farm Family Cookbook. On a recent visit to the farmlands of Yuma I realized that much of the fresh produce coming out of the ground in Arizona goes from farm to table, often in less than 24 hours from the time it was picked. (For visitors who think that all we grow in the desert is cacti, you now have something new to brag about while you’re preparing this delightful spring salad for them!)

It doesn’t get any better than lettuce and celery from Yuma, a crisp crunchy apple from Wilcox, and pecans from Casa Grande and lemons probably from your own backyard. The dressing has become one of my favorites and now I keep a bottle in the frig at all times!

I worked with Arizona Farm Bureau to tell Yuma, Arizona’s agriculture story via video and I feature The Farmer’s Salad.

Directions:
In a skillet, melt butter and brown sugar. Add pecans and cook over low heat until sugar thickens and pecans are coated, about 2-3 minutes. Place pecans on parchment paper or aluminum foil to cool.

Directions:
Place ingredients in a blender or mini food processor. Mix until well blended. Serve and store remainder in a jar in the refrigerator.

Share This:
This entry was posted in Arizona farmers and ranchers, Cooking, In Season, Recipes and tagged Arizona produce in season, Jan D'Atri, recipes. Bookmark the permalink.