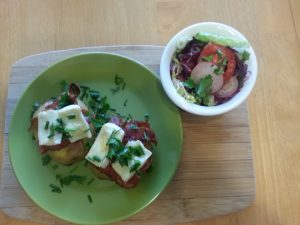 Potatoes have been a comfort food for centuries. There is nothing like hot potato-soup on a cold day, or a nice portion of mashed potatoes when you can’t chew or it’s hard to swallow. Let’s not forget the French fries that make us swoon. As popular as the potato is you’d think we’ve had them forever, but that’s not the case.

The first to cultivate potatoes were the Peruvians, or Inca, back around 8000 B.C. It is presumed, that this fruit of the earth arrived in Europe in the 1570s to be introduced to the British Isles around 1580-1590. In Ireland it became a main staple food within 50 years of its introduction. No wonder this joke came about: What’s a 7-course Irish Meal? Why it’s a six-pack and a potato! In 1621 Nathaniel Butler, at the time Governor of the Bermudas, was the one responsible for introducing the starchy companion to the Colonies. He sent 2 large wooden chests of potatoes and other vegetables to Jamestown, Virginia where Governor Francis Wyatt was awaiting them. They were an immediate hit. However, it wasn’t until around 1719-1720 that North America actually cultivated permanent potato crops, planted and harvested by, it’s assumed, Scottish-Irish immigrants. It wasn’t long before this versatile vegetable spread across the country like a wildfire, soon becoming one of our staple foods.

Just to give you an idea, here’s an interesting stat; in 2011 the world production of potatoes exceeded 374 million metric tons. That’s a lot of potatoes and they are not going out of style anytime soon. Not only do they contain important nutrients such as calcium, magnesium and potassium, they are versatile, have a long shelf life, are very satisfying and have other uses as well. Did you know you can make a very effective heat pack by putting hot potatoes in a towel and applying it to the back or neck where it’s needed? Just saying, in case you don’t have a hot water bottle, this really works because the potatoes retain heat for quite some time. Some of you may remember that we used to make potato stamps to color cloth or wood and sometimes paper with them. But the best part is still the recipes we can come up with to frame them perfectly for any meal. Here is my contribution: 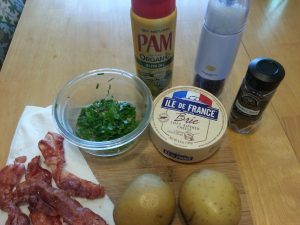 You can serve this colorful and yummy dish as an appetizer, as a side dish or as a light meal with a tossed salad. It’s also easy to prepare them ahead, maybe if you plan on serving it to guests at a dinner. Just do steps 1 thru 9 cover the potatoes in the casserole and set them aside (at most overnight). Avoid refrigeration, the potatoes tend to get hard. The herbs and cheese, on the other hand, belong in the refrigerator until used. Bon Appetit!