As we begin a new year, everyone is taking a look back at what was hot in 2011.  From the top movies to the best blogs, there are top ten lists for almost everything, and food is no exception.  As we looked at each top ten list and every trend recap, the most consistent thing we found was that everyone has their own opinion about what topped the list of 2011 food trends.

We were able to uncover a few overarching themes that made 2011 an interesting year for food.  Whether you are a foodie or a farmer, there is sure to be something on this list that suits your palette.  The question is; will these trends continue into 2012?  I guess we’ll find out! 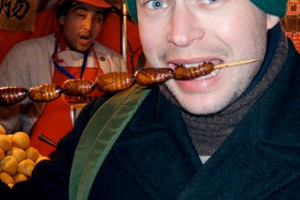 What odd eats did you encounter in 2011?

2011 was the year that food ventured far outside the norm, in some cases, venturing so far that it ended up in the yard!  Here are a few of the unusual items that gained popularity making 2011 an odd year in more ways than one.

Bugs.  It seemed like no matter where you looked, you could find some unconventional ingredient coexisting on your plate next to your standard cuisine.  The use of bugs and other crawly critters is just one example of this kind of “outside the plate” thinking.  Before you shudder distastefully and move on, you should know that insects as a food source are both environmentally sustainable and good for you.

Offal.  Popularized by St. John restaurant in London, the use of offal meats like liver, testicles, tongue, stomach, and lung was the experimental cuisine that everyone was trying this year.

Whether you were at a high-end foodie eatery or the diner down the road, custom-made condiments were a must have for America’s diners.  Chefs in every genre created their own condiments, like ketchup, mustard, honey, pesto, jam, and salad dressing.

From donuts to dinner, fancy and often unusual flavors were showing up in all kinds of food.  Donut shops carried bacon donuts, fried chicken donuts, and nutella tahini donuts.  Chinese restaurants looked to their homeland for inspiration, offering customers a more authentic taste of China than the American version of traditional Chinese food.  By bringing local variants, Chinese chefs opened new doors to the cuisines of the region.

The cupcake craze has been around for years, but in 2011 it took a walk on the wild side.  Savory cupcakes with fillings like lasagna, meatloaf, and fontina cheese made their debut and won over hearts and minds throughout the country.  If you opted out of serving cupcakes this year, it’s probably because you opted for macarons instead.  Seen as the trend that will knock traditional cupcakes back to birthday parties for good, these brightly colored French desserts made in a wide array or flavors were showing up everywhere  this year.