How Climate Change is Affecting Our Farmers – The Challenges 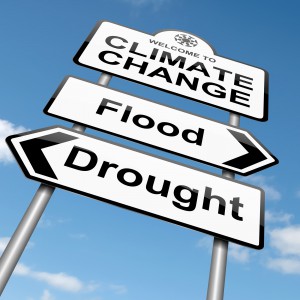 The success of farms and ranches has always been impacted by the whims of the weather.  Variability from year to year in rainfall and temperature can significantly impact how much of each crop farms can produce which has a direct impact on the price consumers pay for those items.  For example, severe drought in the southern states affected the peanut crop several years back which resulted in a 30% jump in the cost of a jar of peanut butter overnight.  But over the last century, farmers and ranchers have adjusted their practices and adopted new strategies to help them manage the local weather volatility to the best advantage.  These adaptations have resulted in higher yields and greater food security for the world as a whole.

While it is good to celebrate the success of the past, the agricultural community must also continue to look forward which means considering the impact of climate change on farming and ranching.

Whether the influence is climate change or not, farmers have to prepare for the challenges of weather.

Climate science predicts that the future will see increases in averages temperatures and changes to rainfall amounts, precipitation patterns, and even pest distribution.  This means that farmers and ranchers will have to continue to adapt in order to protect the food supply and their livelihood.  Unfortunately, this means trying to adapt to a moving target as the impacts of climate change on specific localities remain uncertain.

Generally, the increase in average temperature is expected to decrease crop yield for key crops like corn and soybeans.  This means that there will be less food available than there is now, despite an ever increasing global population.  While the expected shifts in precipitation patterns may also impact the yield regionally, when looking across the board higher temps means less crops.  Additionally, changing conditions can cause changes to the distribution of pests which can also impact crop yield as well as changing environmental impacts.  While uncertainties remain, the following situations are expected to be the result of our changing climate.

In regions where the shifting precipitation patterns are adequate to prevent drought conditions, these areas may see increased crop yield or may require a shift to crops with higher temperature tolerance.  If precipitation patterns are not adequate, widespread drought may result in severely decreased crop yields in those areas.  In addition, crop redistribution across regions can have very serious implications for water quality.

Changes in regional climate like those described above can also result in changes in where pests thrive which means increased costs for pest control and decreased crop yield.   This means higher costs for consumers and increased risk of unforeseen or unplanned environmental impact.

Whatever the cause, it is important to note, it’s not so much climate change as the year around fact that agriculture must deal with challenging weather conditions.