Christmas Traditions on the Farm: Oyster Stew on Christmas Eve 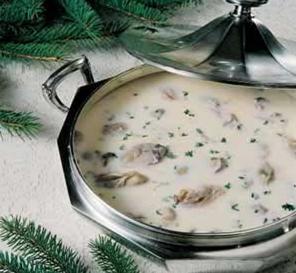 So, where did the tradition start? We’re still piecing that together. But it turns out the tradition is common in more than one culture.

According to some, Irish immigrants who had fled to America during the potato famine in the mid-1800s began the tradition since they were accustomed to a Christmas Eve stew containing ling fish, which wasn’t available here.

The reason for a seafood dish on Christmas Eve was that eating meat the day before a religious feast, like Christmas, was forbidden by the Catholic Church.

In Italy, fish soup, “zuppa di pesce,” was likewise consumed. In some homes in Mexico, oyster stew (“estofado de ostras”) also came to be a dish served on Christmas Eve.

So the experts conclude that the tradition of fish or oyster stew on Christmas Eve spread to other cultures beyond the Irish and Catholic traditions.

But Mom tells a story of her Grandpa Ward bringing home an entire bucket for Grandma Ward to cook in a stew. And they lived in land-locked Iowa. Well, there may be an explanation for that too.

In Bill Neal’s Southern Cooking (1989), Neal writes, “Before acceptance of refrigerated food transport (for meat only, first, and that was in the 1880s), inland food supplies depended on the weather. Even after the first frost warm spells threatened the integrity of almost any product, especially seafood. Only December, though the fourth ‘R’ month, guaranteed enough sustained cold weather for shipping. Then, from Baltimore, to Charleston, to New Orleans, oysters were shoveled onto the flat backs of horse-drawn wagons and packed down in wet straw and seaweed for an inland journey sometimes lasting two weeks or more. Far from the coast, oyster became a symbol of the arrival of the winter holiday season, appearing in the markets by Christmas Eve and on the tables that night as oyster stew.”

So there you have it. Grandpa Ward’s bucket of fresh oysters signaled for the family that winter was official and it was time to cook something that warmed the soul and celebrated Christmas.

The Family Recipe for Oyster Stew

Melt the butter in a large skillet over medium heat, and cook the celery and shallots until shallots are tender.

Pour half-and-half into a large pot over medium-high heat. Mix in the butter, celery, and shallot mixture. Stir continuously. When the mixture is almost boiling, pour the oysters and their liquid into the pot.

Season with salt, pepper, and cayenne pepper. Stir continuously until the oysters curl at the ends.

When the oysters curl the stew is finished cooking; turn off the heat and serve.

Tell us your stories of Christmas Tradition on the Farm or Ranch! Just respond to the blog post where you can post messages. We want to hear your stories too!!!!

4 Responses to Christmas Traditions on the Farm: Oyster Stew on Christmas Eve