Much like quinoa, amaranth was grown by the Aztecs and then nearly abolished during the Spanish conquest. Also like quinoa, this ancient grain is making a comeback. 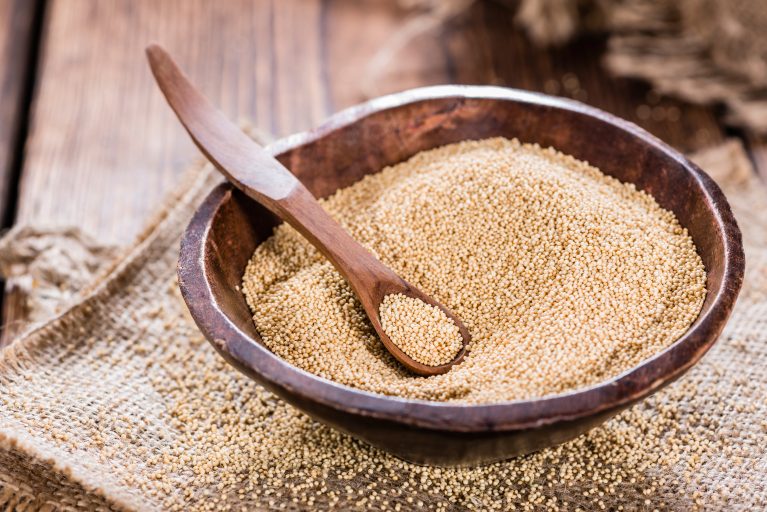 Amaranth, botanically known as Amaranthus, are tall plants with wide green leaves and strikingly bright gold, purple, or red flowers. There are three species (from the 60 known varieties) that are commonly grown for their edible seeds – Amaranthus caudatus, Amaranthus cruenus, and Amaranthus hypochondriacus.

According to the Whole Grains Council, amaranth is not a true cereal grain like oats, sorghum, and wheat. A “true cereal” stems from the Poaceae plant family. As amaranth belongs to a different plant species, it is referred to as a pseudo-cereal. Amaranth is included in the grain group because its nutrient profile is similar to that of the cereal grains, and pseudo-cereals like amaranth are utilized in diets in much the same way as the “true cereals.”

Amaranth is considered to be native to Peru, and has a long history in Mexico. As a major food crop of the Aztecs, it is estimated that amaranth was first domesticated 6,000 to 8,000 years ago. The Aztecs did not only grow amaranth for consumption, but would also use the grain as part of their religious practices. They would create an image of a deity using a combination of amaranth and honey. Once the image was formed, they were worshipped then broken into pieces and passed out for people to eat. In their attempts to convert the Aztecs to Christianity, Cortez and his conquistadors outlawed all foods involved in the Aztec ceremonies, including amaranth. Those found possessing or growing amaranth were severely punished. Cultivation of the plant was halted for many years, but it was never completely eradicated.

Since the time of the Aztec, amaranth seed has spread from its roots in Mexico and South America all around the world. The grain and the leaves have become an important food source in places such as Africa, India, and Nepal. The Whole Grain Council states that in the last two decades, amaranth has reached an impressive amount of farmers and can now be found in places like China, Nigeria, Russia, and Thailand. Amaranth grows best in high elevation, but it is incredibly adaptive. Amaranth can do well in loose, moist soil with good drainage at nearly any elevation an in almost any temperate climate. Once amaranth is established it will thrive in low-water conditions. This is especially valuable in places like sub-Sahara Africa where there are few water sources, especially during the dry season.
It wasn’t until the 1970’s that people became interested as a food source in the United States. Today amaranth is grown in small amounts in Iowa, Missouri, Nebraska, North Dakota and Long Island, NY.

Nutritionally speaking, the vitamins, minerals, and amino acids in amaranth is very similar to that of other grains as well as to leafy green vegetables such as Swiss chard.
• According to the Amaranth Institute, the seeds are 13 to 15 percent protein, which is among the highest for grains.
• Amaranth is considered a complete protein.
• It’s the only grain documented to contain Vitamin C.
• Amaranth contains more than three times the average amount of calcium and is also high in iron, magnesium, phosphorus, and potassium.
• Amaranth leaves are edible and contain more calcium, phosphorus, and vitamin C than spinach.
• Amaranth contains the amino acid lysine.
• There is no gluten in amaranth, making it a safe grain for people who suffer from gluten allergies and intolerances like Celiac disease.
• Amaranth is a good source of folate, which is good for women who are expecting.
• According to the Whole Grain Council, it’s good for your heart. Amaranth has shown potential as a cholesterol-lowing whole grain in several studies conducted over the past 14 years.
• A study on amaranth reported that its seeds contain not only important nutritional properties, but also phytochemical compounds like rutin and nicotiflorin, and peptides with the ability to help lower hypertension and incidences of cancer.

Amaranth is sold on the streets, popped like corn, in many South American countries. In countries like India, Mexico, and Peru amaranth is often an ingredient in breakfast porridge. A favorite indulgence in Mexico is dulce de alegria, a candy-like treat that is made from popped amaranth mixed with honey or sugar. Amaranth can also be eaten on its own, much like quinoa. Its flavor ranges from nutty and light to flavorful and peppery. Amaranth is good used as a thickener for soups, stews, and sauces. It is most commonly eaten as an ingredient in breads, cereals, crackers, muffins, and pancakes.
To cook amaranth, you should treat it much like you would rice or pasta: boil around six cups of water per one cup of amaranth. Cook for roughly 15-20 minutes then drain rinse and eat.

• Amaranth gets its name from the Greek amarantos, meaning “the never-fading,” or “one that does not wither.”
• Your average amaranth plant grows to be between five and eight feet tall. The tallest amaranth plant currently on record in the Guinness Book of World Records measured an incredible 27 feet 10 inches!
• Amaranth was on board the Space Shuttle Atlantis when it made its maiden voyage October 3, 1985. The crew members conducted experiments on germinating amaranth in space, and NASA chefs prepared amaranth cookies for the astronauts to eat during the mission.

There are currently no amaranth recipes available on Fill Your Plate, but we have provided you with one that we found on the Whole Grain Council’s page if you would like to give it a try.